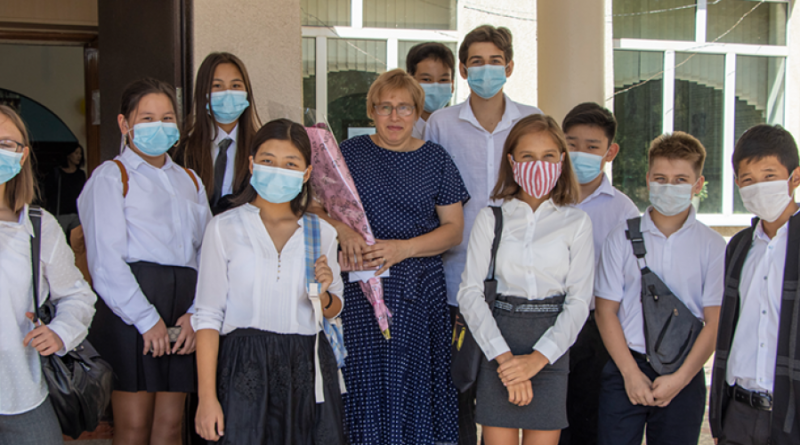 For students of all ages in the Kyrgyz Republic, September 15 was an important day. It marked the start of the new school year, two weeks later than usual, after a full academic year online.  For a country with a strong emphasis on education and near-universal enrollment rates in primary and lower-secondary schools, the decision to return to in-person learning impacted around 1.8 million students, their parents, and teachers. Delaying the start by two weeks allowed more time for teachers and personnel to receive their COVID-19 vaccinations prior to reopening.

With students returning to class, the government needs to make a concerted effort to build back better. Even prior to the COVID-19 crisis Kyrgyzstani students lagged their peers academically. The 2014 National Sample-Based Assessment of Student Educational Achievements brought into sharp focus that about 60% of grade 4 students in Kyrgyzstan had difficulty comprehending a text tailored for their age. In 2009, PISA revealed that 82% of 15-year-old students in the Kyrgyz Republic were functionally illiterate. Following these disappointing results, the Kyrgyz Republic withdrew from international assessments for more than a decade, and only recently announced its intention to participate in the next round of PISA in 2024.

The magnitude of the pandemic-driven learning loss is estimated to be high, and there is a lot at stake. Prior to the pandemic, children in the Kyrgyz Republic already faced an uphill battle when it comes to becoming a productive adult. The World Bank’s 2020 Human Capital Index estimated that, due to various risks to health and education, Kyrgyzstani children would only reach 60% of the full potential.  The gaps in learning over the past year will create only more hurdles for children in the Kyrgyz Republic to overcome. The World Bank estimates that learning in the Kyrgyz Republic will drop by an equivalent of 10 PISA points in schools closed for six months, and 20 PISA points in schools that were closed for a year.   The percentage of students performing below functional literacy may spike up to 97% in schools that were closed for the entire last year. The challenge now is to protect and extend the previous human capital gains.

The World Bank’s most recent Public Expenditure Review in the Kyrgyz Republic offers several recommendations for making education spending more efficient, improving the quality of education and increasing equity.  The Kyrgyz Republic devotes 7% of its GDP to education spending, making it one of the world’s biggest spenders on education, measured both by share of total government expenditure and by share of GDP. This impressive commitment to education needs to be sustained as expenditures per student are lower than many other countries of similar income levels.  The Kyrgyz Republic spends PPP $904 per student on general and vocational education, compared to about PPP $1,337 in other lower-middle income countries. The report suggests three important actions. First, prioritize investments in teacher training and learning resources such as textbooks and laboratory equipment. Next, introduce regular quality assessments at all education levels and ensure that policies and programs can be evaluated for equity and impact. Finally, the country needs to build more schools. Currently, 72% of schools in the Kyrgyz Republic operate in shifts due to overcrowding, which limits the classroom time available to each student.

With these recommendations in mind, the World Bank is working closely with the government of the Kyrgyz Republic to boost learning outcomes and to make education in the country more equitable. The main focus of the World Bank-funded Learning for the Future Project is early childhood education given its essential role for later learning and success. The preschool enrollment rate of children between 3-6 years of age has increased from 6% to 40% over the past two decades but is still far below universal rates. Efficiency of spending needs improvement. For example, preschool expenditure in 2017 was enough to provide three hours of preschool education to all children ages 3 to 6 in the country, yet only covered 27.4 percent of children. That is because public kindergartens generally provide 10 and 24 hours of stay, much higher than in any OECD country.  Furthermore, in the Kyrgyz Republic, children from the poorest quintile are half as likely as children from the wealthiest quintile to attend early childhood education.

Learning for the Future Project will help rehabilitate and establish in existing premises 500 fully equipped community-based preschools in poor communities countrywide, thus enabling a successful transition to school for 20,000 children aged 3-5 years.  These preschools will operate three hours a day focusing on the development and education of children.  Such an approach allows for most efficient use of scarce resources through reduced costs of care, food, building maintenance, and reduction of non-teaching staff.  This project will also help train teachers to be better at their craft, equip 1,200 schools with an IT platform, and help the country prepare for PISA 2024.

The World Bank remains committed to assisting the Government in improving the human development outcomes for the Kyrgyz Republic and is seeking opportunities to deepen our partnership in these areas. The student population has grown by 40% in the last 15 years, and current trends suggest that the school-age population will continue to grow until 2045. It will need a careful and comprehensive effort to improve the education system so that the students of the future are prepared for their lives ahead.