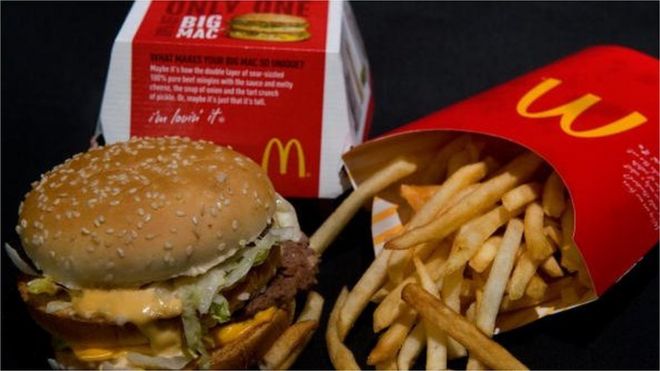 McDonald’s is to move its non-US tax base from Luxembourg to the UK, the company has said.

The new holding company will pay UK tax on the royalties the firm receives outside the US.

McDonald’s said it had chosen the UK due to the “significant number of staff” it has in London.

The Luxembourg tax affairs of the burger giant are currently under formal investigation by the European Commission.

McDonald’s said that the holding company would have “responsibility for the majority of the royalties received from licensing the company’s global intellectual property rights outside the US”.

Simon Jack: Why did McDonald’s flip out of Luxembourg?

A McDonald’s spokesman said the shift in the tax domicile for its non-US operations was not to do with obtaining a better rate of corporation tax, but was more to do with making its operations more efficient.

“This unified structure will be administratively simpler and will reduce expenses and enhance flexibility,” the firm said.

The office in Luxembourg will remain responsible for the restaurants in that country, but “other functions will transfer to the new UK-based holding company,” McDonald’s said.

On Tuesday, the European Commission began a formal investigation of Luxembourg’s tax deal with McDonald’s.

The Commission’s preliminary view is that the deal may have breached European state aid rules.

It said that since two tax rulings given by Luxembourg in 2009, a McDonald’s subsidiary had effectively paid no corporation tax, despite recording substantial profits – for example, of more than €250m (£210m) in 2013.

‘Not worth the hassle’

Companies were also “deciding it’s no longer worth the hassle and the risk” of using low-tax arrangements due to work by the OECD on “base erosion and profit shifting” – or corporate tax avoidance, according to Ms Self.

Governments are being encouraged to adopt the OECD proposals to stop companies dodging tax.

The UK could be attractive to McDonalds as it has a relatively low rate of corporation tax and a pool of highly-skilled potential employees, she added.

The Republic of Ireland, which has attracted US multi-nationals such as Apple, has a corporate tax rate of 12.5%.