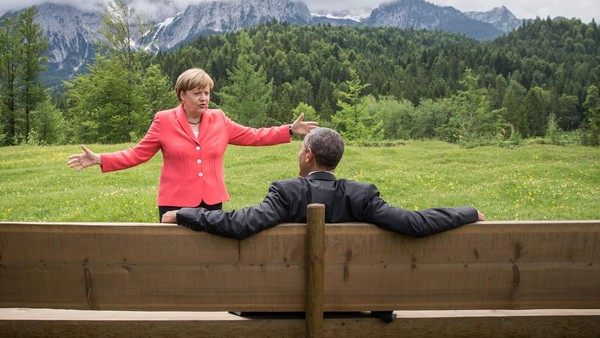 Now we know what Angela Merkel was probably saying to President Barack Obama as she spread her arms wide in that impromptu G7 photo from Bavaria last week.

“Do you have any idea how many German companies are suffering from a stronger euro? This many!”

Currency worries are on the German chancellor’s mind, as she made clear on Friday when she complained about the strength of the euro.

The deflation-racked eurozone economy has benefited from a sustained period of euro weakness. In May 2014 a euro was worth $1.40. In March it dropped to $1.05, and was projected to fall below parity.

But a sluggish first quarter for the US economy has delayed the Federal Reserve’s long-awaited interest rate rise and introduced a corrective tone to trading dollar/euro — the most active currency pair.

This has been welcomed by the many US companies that squealed about dollar strength in their first-quarter earnings — but resented by their European counterparts.

It is notable that the increasingly dire turn of events over Greece has yet to leave a negative impression on the euro, with the currency 4.5 per cent firmer since April.

So the German chancellor’s comments have put currency investors on alert, especially given that they came on the back of a denial by the White House that Mr Obama had been fretting at the G7 about a strong dollar.

Traders have picked up on the currency tension between the two economic engines of the western world. Adrian Owens, currency fund manager at GAM, can see Ms Merkel’s point. A year ago the dollar was “far too weak”, he says. Today it is trading only at the average of the past 40 years.

Just as a weaker currency channel was an important part of the Fed’s quantitative easing programme, so it is part of the playbook of the European Central Bank for its bond-purchasing drive, though the ECB will not say so publicly.

With many economists expecting the Fed to raise rates this year, the US central bank is heading for the exit from aggressive monetary easing.

The ECB had hoped the divergence between monetary policy on either side of the Atlantic would weaken the euro against the dollar.

But the path of the exchange rate has been much more volatile than central bankers would like. A big difference is that whereas the Fed was buying debt in one market, the ECB is having to trade in 19, which makes reaching its €60bn-a-month targets more complicated.

Markets were guided towards the exit by the US central bank when it said it would begin slowing its bond-buying only when economic data turned more positive.

The ECB has been vaguer about what would lead it to taper its bond-buying before the expected end date of September 2016. It said only that it would maintain its buying pace until policy makers saw a sustained “adjustment in the path of inflation” consistent with inflation returning to the target of just below 2 per cent in the “medium term”.

The complexities of eurozone QE are feeding a volatile bond market and in turn driving the euro higher against the dollar. Such turmoil in the bond markets has left the ECB less certain of the direction of the euro.

A subtle shift has taken place in currency markets this year, says Matthew Cobon, fund manager at Columbia Threadneedle. “Currencies are no longer the primary driver of financial markets,” he says. “They are being informed by movements in the rates market.”

Why are yields going higher? Inflation is picking up in the eurozone, but the pace of recent Bund yield moves is “astonishing”, Mr Derrick says.

The ECB’s latest staff forecasts are based on an exchange rate of $1.12 and show inflation rising to 1.8 per cent in 2017. If the euro continued to hover around its current level, policy makers in Frankfurt would be content.

But sharp movements in either direction would have a strong impact on the economists’ projections for inflation.

Mr Derrick suspects the approaching endgame over Greece and its possible default will have a big part to play. “No matter what happens in Greece, there will have to be a debt write-off. The eurozone as a whole is responsible for Greek debt,” he says.

Currencies are no longer the primary driver of financial markets. They are being informed by movements in the ratesmarket– Matthew Cobon, Columbia Threadneedle

Greece may yet pull the euro down. The Commodity Futures Trading Commission reported a steady retreat from bets against the single currency in the past three months.

But it has not done so yet. Anxiety about Greece should have been sending the euro lower, not higher, says Mr Derrick.

“US worries about a strong dollar and Greece spiking yields higher is ending up with a sharp spike in the euro, which is confounding the entire market. Maybe Ms Merkel is effectively saying that we’ve ended up with a stronger currency, and we’re losing the currency wars game.”

It is noticeable how quiet Mr Obama appears in that Bavarian photo.