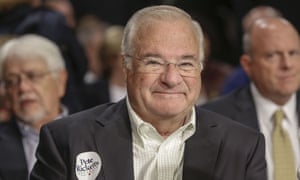 A billionaire’s decision last week to shutter the news sites Gothamist and DNAInfo, just a week after employees voted to unionise, seemed to mark another low for unions in online media age.

Owner Joe Ricketts seemed to be making good on threats to pull the plug on his publications if workers joined a union. But in a public statement, Ricketts – a Donald Trump backer and founder of the discount stock brokerage TD Ameritrade – said the decision was purely financial.

The company, he said, “is, at the end of the day, a business, and businesses need to be economically successful if they are to endure”.

He added that while “important progress” had been made, “that progress hasn’t been sufficient to support the tremendous effort and expense needed to produce the type of journalism on which the company was founded.”

The decision to close New York-based Gothamist, DNAinfo, and sibling sites in Washington, DC, Chicago, Los Angeles, San Francisco, and Shanghai left 116 journalists, salespeople and developers out of work. The Writers Guild of America East, which the staff had voted to join only days before, said in a statement posted on Twitter that it was “deeply concerned” about the decision to close the publications: “It is no secret that threats were made to these workers during the organizing drive.”

It is believed that Ricketts lost money throughout his involvement with local news sites, a once-profitable sector hard hit by falling advertising rates. Established brands, including the New York Times and the Wall Street Journal, have reduced their metro commitments or closed local-focused sections as revenues have dwindled. Some publications, including the Village Voice, have closed print editions; others, like the New York Sun, have ceased to publish entirely.

In a blog post last month, Ricketts argued that unions “promote a corrosive us-against-them dynamic that destroys the esprit de corps businesses need to succeed” that “makes no sense … where an entrepreneur is staking his capital on a business that is providing jobs and promoting innovation”.

But Tim Schick, administrative director of NewsGuild-CWA, says unionization doesnt have to come with a huge cost to the employer. “They fight it tooth and nail because it means they have to sit down with workers to talk about wages and benefits.”

Schick, whose organization represents US workers at The Guardian, believes that in such negotiations bargaining, trade offs and solutions often come from employees.

“Because worker voice through unionization reduces absolute control, the business owners tend to fight it off rather than embrace it,” he said. “It’s their fear and philosophical opposition to employees unionizing, so they fight it rather than sitting down, working out what the issues are, and finding solutions.”

Union representation has not always protected online news workers – in June, Huffpost laid off 39 staffers represented by the Writers Guild of America East.

Nonetheless, the trend toward representation is clear. Since mid-2015, staff at Vice, Fusion, The Root, Salon, Daily Beast, MTV News, ThinkProgress, Jacobin, The Intercept, Thrillist, Slate, and the now-shuttered Gawker have all chosen WGAE or NewsGuild representation.

DNAInfo and Gothamist workers initially agreed to unionize in April. But Ricketts refused to recognize the union, telling workers in an email: “As long as it’s my money that’s paying for everything, I intend to be the one making the decisions about the direction of the business.”

COO Dan Swarz chimed in, reminded employees that since launching in 2009, DNAInfo “has been supported by a single investor, Joe Ricketts” who “has never taken a dime out of the business”. Schwarz added: “Would a union be the final straw that caused the business to close? I don’t know.”

Undeterred, the guild held a formal vote last month. “No one’s trying to bankrupt anybody,” DNAInfo reporter Kate Honan told the New York Times. “We just want to have an ability to negotiate things, and not necessarily money. If this is the future of journalism, it should be a career for people, not a post-college hobby.”

Lowell Peterson, executive director of the Writers Guild of America East, says the union’s lawyers are now looking at a legal challenge. Peterson believes the “typical blather” about unionization could amount to an “unlawful threat.”

“Ricketts and his minions have made ugly statements that suggest unionization led to the shut-down,” Peterson said. “At the same time they’re hinting that they couldn’t figure out how to make a profit on local news.”

That may be true, Peterson considers, but that would also make DNAinfo the only website the union represents that is unable to make a profit – which leads him to surmise that Ricketts’ decision is indeed founded in philosophy rather than frugality.

“The only thing that led to DNAinfo journalists losing their jobs is Joe Ricketts. Not his employees’ decision to unionize. So the question that needs to be posed is, which is it? Did you close the company to thwart your employees’ federally-protected right to unionize, or that you were losing money, in which case be honest about it.”

In Peterson’s estimation, Ricketts’ decision is far more likely to have been based in “ideological malarkey” than economics. “We hadn’t even sat down to talk about the contract or the terms of the contract, so its just not logical to blame to cost of unionization.”

For journalists at the company, management’s decision to close the sites came as shock. Aaron Cynic, a writer with Chicagoist, said he was fully supportive of the New York employees’ decision to unionize. He held out little hope that Ricketts’ decision was by way of establishing a bargaining position.