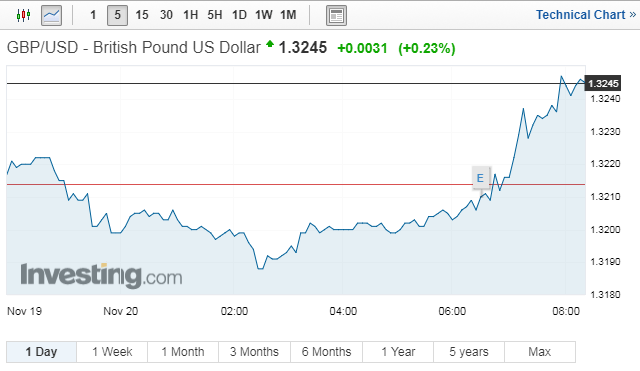 Sterling was firmer against both the dollar and the euro ahead of the UK budget on Wednesday.

And the pound – up 0.23% to 1.3245 against the dollar this morning – was helped further following press reports the British government is prepared to increase its offer of money to settle the Brexit divorce bill.

UK Chancellor Philip Hammond reportedly intends to cough up more cash as a way of advancing stalled talks with the European Union by next month’s EU summit.

BRC Chief Executive Helen Dickinson recently called on Hammond to deliver a budget for shoppers later this month in order to keep spending strong and shore up the UK economy.

She said: “Considering the intrinsic link between consumer spending and economic growth, the chancellor should reflect on this disappointing state of play and deliver a budget that allays the risks of a further slowdown in consumer spending, by keeping down the cost of living. In other words, a shoppers’ budget.”

The Bank of England last week raised interest rates by 0.25 per cent to 0.50 per cent for the first time in ten years after the economy grew more quickly than expected in the third quarter of this year.

Sterling did fall sharply on the day as markets appeared to have fully priced the interest rate rise in a reaction to the announcement.

More fluctuations in the pound to dollar exchange rate are expected as US investors speculate on who will become the next head of the Federal Reserve – the American version of the Bank of England.

The pound is also affected by domestic affairs, with Brexit a source of worry for some investors.

Recent news has increased economic uncertainty, which can give the market jitters.