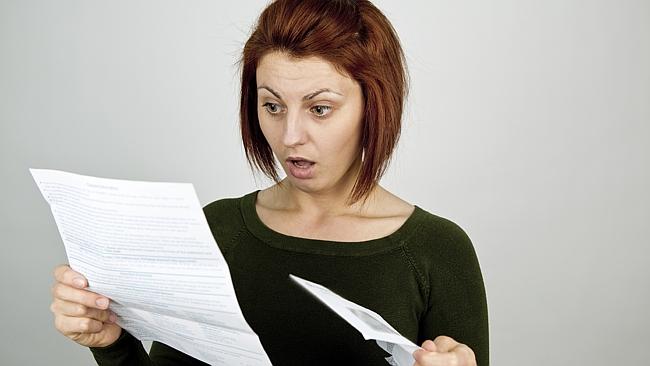 NO one’s heard of a bank fee called interchange. It already costs you dearly and thanks to the RBA could get even worse.

We rightly get steamed up about the excessively high interest rates on credit cards but risk overlooking the already costly impact of a much less obvious charge now set to cost consumers even more.

While it’s easy to be outraged at monstrously high interest rates of 19 per cent imposed by banks, and sneaky surcharges added by some merchants such as airlines, at least their hit on the hip pocket is obvious.

Far less apparent is the impact, especially to the elderly, less-well-off and groups such as police and nurses, of a fee scantly scrutinised by cardholders which hits them dearly.

And the irony is that the organisation pushing to regulate this fee in a way which will, as it has before, shift costs of hundreds of millions onto consumers isn’t one of the big four banks but the Reserve Bank of Australia.

The RBA is consulting with industry amidst a heated debate among banks, large and small, and other players in the payments system about the costs and benefits of further regulatory change.

The argument is all about the level of interchange. It’s a small fee, about 0.5 per cent of the transaction, which is paid between banks to help make the whole credit card process work. It pays for the actual credit, the interest-free days, fraud protection and other benefits.

Interchange gives incentives for innovation around growing non-cash payment systems such as ‘tap and go’ and others in the pipeline. It even pays customers back for goods and services paid for by card but which never arrived.

However changes to the way the fee is regulated in the past, and current proposals from the Reserve Bank to change the rules again, are far more than just technical tweaks. They have potentially serious fallout for millions of cardholders.

The last time the RBA altered the policy in 2003 by reducing interchange fees the banks recouped their lower revenues by shifting the costs onto consumers. It adds up through higher fees on credit cards to $480 million extra each and every a year.

Merchants, be they shops, airlines or hotels, have saved $8 billion through lower interchange fees in the past 12 years all for accepting your plastic to buy their goods and services.

Yet there’s no evidence despite various RBA claims, which have grown ever more silent over time, that consumers saw any of the promised benefit of lower prices.

While it can be argued these were largely unforeseen consequences of the RBA intervening in the market to try and reduce costs to merchants they have clearly had the effect of increasing them for consumers.

Also the regulator’s decisions ushered in the era of permitting merchants for the first time to surcharge credit cards. Again at a substantial and rising cost to consumers and clear benefit to business.

Now the RBA wants to do it all over again in the name of competition. This time the consequences could include hitting the very financial institutions which compete most with the big four banks.

The industry body representing credit unions, mutual banks and building societies, and with them four million customers, have 19 of the 20 lowest rate credit cards in the market.

CHOICE’s list of the best low rate credit cards on the market, which they recommend consumers to switch to from the more costly big banks, are all such smaller institutions.

But the Customer Owned banking Association (COBA) says reducing the interchange fee will have a far more detrimental effect on them than the big banks, because COBA’s banks represent more consumers than businesses in the cards market.

As such they warn the proposed changes will reduce their member banks’ capacity to offer affordable, low cost credit cards particularly to groups such as nurses, the police and others with specialised, popular and good value credit unions.

The RBA’s rationale for regulation is that the present level somehow distorts the payments system in favour of using credit cards instead of cash or other instruments.

But many of the payments industry dispute this, pointing to the unintended consequences of previous interventions and the risk of actually reducing incentives for innovation and more competition in the area.

Remember when the RBA made ATMs display the costs of using them on the screen saying transparency and competition would bring the $2 fee down? Despite their good intentions if anything some have cost more.

Paradoxically, bringing any fee down is mostly but not always a good thing, especially if banks can recover lost revenues from consumers via higher interest rates and other charges and merchants do not pass on savings.

NSW Senator Sam Dastyari, who has shown himself the consumer’s friend when it comes to financial services, has questioned whether more regulation has stifled competition around credit cards and led to higher interest rates.

Excessive credit card surcharges and high interest rates have been a windfall for merchants and banks and there needs to be action against both to restore some balance.

With the RBA’s proposed changes to interchange fees we need to ask many more questions and get much better answers as to who will really pay for this set of ‘reforms’.