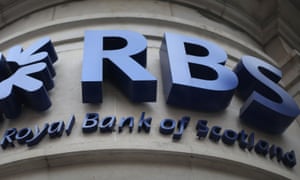 Royal Bank of Scotland has been driven deep into the red again by legal costs and a hefty restructuring bill as it enters its ninth year under government ownership.

The bailout of the Edinburgh-based bank was announced in October 2008 and £45bn of taxpayer money was eventually pumped into the bank, which has not reported a full-year profit since then.

In the first nine months of 2016, RBS made a £2.5bn loss after incurring a £469m loss in the third quarter. It was profitable in the same three months last year.

As Ross McEwan, the chief executive, tried to focus on the £1.3bn of profits generated in the third quarter before the legal and restructuring charges, he said the 73% taxpayer-owned bank faced several hurdles in the months ahead.

Among them is the admission that it will fail to meet a deadline to divest 300 branches – which were to be known as Williams & Glyn. That deadline was imposed by the European Union as a result of its taxpayer bailout. After a number of failed attempts, RBS said full separation and divestment could not now be achieved by the end of 2017.

Discussions are under way with the Treasury to discuss how it can spin off the branches. The bank was ordered to get rid of them by the EU as a penalty for its bailout.

The inability to dispose of W&G – a process which has already cost £1.7bn – is one of the barriers to the government selling off any more of its stake and the bank’s ability to pay dividends.

The third quarter was knocked by restructuring costs of £469m, largely W&G, a £425m legal bill and a £300m loss incurred because of changes to tax rules.

“We’ve said that 2015 and 2016 would be noisy as we work through legacy issues and transform this bank for customers,” said McEwan. “These results reflect that noise. Our core business results were good with a £1.3bn adjusted operating profit, our best quarter since 2014.”

In its third-quarter results, RBS warned that it faced a “range of uncertainties”, which included a settlement with the US Department of Justice over the sale of mortgage bonds. The bank said it could face charges and costs that would be so large it could knock its level of capital.

RBS said it did not know when it would be able start paying dividends, with McEwan adding that performance targets he set for 2019 would not be met. He is expected to announce in February what measures would be needed to respond to the post-Brexit-vote environment.

The bank’s shares initially rose on Friday but fell back to close at 194p, down 1.2% and well below the average price of 502p paid by taxpayers during the bailout.

As a result of missing the W&G deadline, McEwan faces the possibility of the EU installing a trustee at end of next year. But he said he did not know what the consequences would be of missing the already extended deadline.

RBS had deployed 7,000 staff to work on the divestment but this has now been cut back to 350. The bank has abandoned any hope of a stock market flotation for W&G, bringing that formally to a close this week by redeeming a bond it had sold to a consortium of private equity firms – and the Church of England. The bond was to convert into W&G shares.

A trade sale may be possible as Clydesdale bank said this week it had made an offer for the branches.

Small-business owners were angered when RBS did not set aside any money to pay compensation for the poor treatment they claim they received from the bank’s now defunct global restructuring group. A delayed report into the conduct of the division is expected to be published by the Financial Conduct Authority by the end of the year.

“RBS continues to mislead the market by not making adequate provisions to meet pending legal challenges,” said James Hayward, chief executive of RGL Management, which was formed to sue RBS over the claims.

RBS set aside an unspecified sum to cover a £4bn legal claim from investors in relation to its 2008 cash call. Attempts at mediation have failed and McEwan said: “We are exploring settlement options. If that fails we’ll be in court in March 2017.” This raises the prospect of former RBS boss Fred Goodwin being called to court.