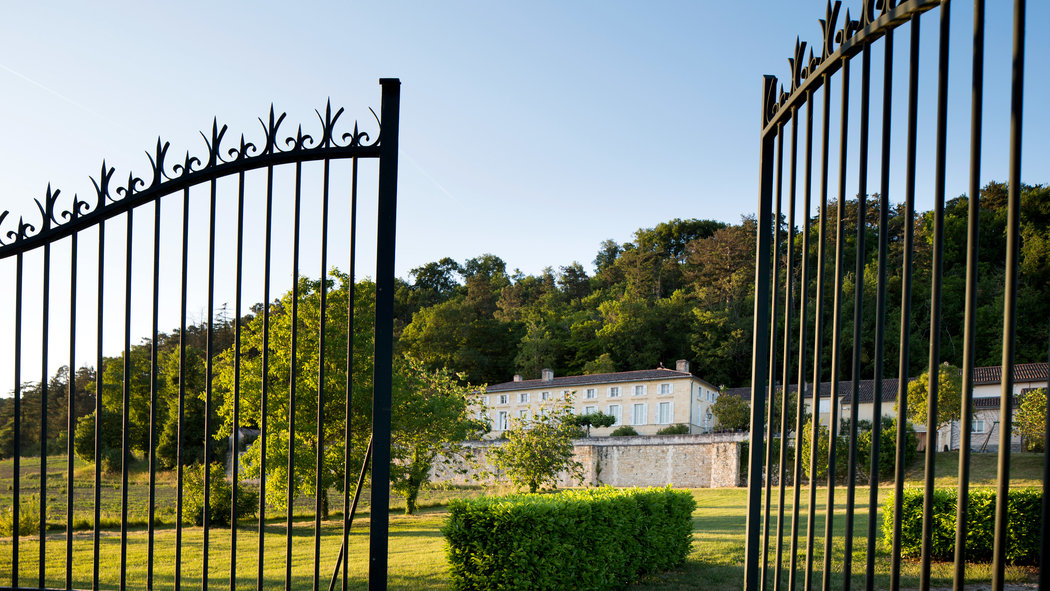 A SIX-BEDROOM CHATEAU WITH WINEMAKING EQUIPMENT NEAR BORDEAUX

This six-bedroom four-bathroom chateau in the typical style of the Gironde region dates to 1784, and remained in the same family until the late 1990s, when it was bought by the current owners, said Michael Baynes of Maxwell-Storrie-Baynes real estate, a Christie’s affiliate, which is listing the property. The Gironde style, commonly seen in wine properties, is characterized by a rectangular shape, stone construction and a south- or west-facing orientation of dwelling areas, leaving the cooler northern exposures for wine production and storage.

The property, within the Côtes de Bordeaux wine appellation, totals about 35 acres, with about 20 acres suitable for vineyards. The owners have recently stopped producing wine, and the vines have been removed to allow the next owners to plant the varieties of grapes they prefer, Mr. Baynes said, though the winemaking equipment and barrels remain in excellent condition. Capacity is about 100,000 bottles, and Mr. Baynes added that grants may be available from the European Union to assist in replanting.

The three-story chateau, which has about 5,400 square feet of living space, has been restored within the last dozen years, retaining and preserving original details like wood floors, handmade tiles and working fireplaces, while modernizing the infrastructure. Floor-to-ceiling windows and wide doorways flood most rooms with light.

The main entrance is up a short flight of exterior stairs into a central hall. The first floor has an office, a family room, a drawing room, a dining room, a bedroom with en-suite bathroom and an eat-in kitchen, which has walnut cabinetry designed and made in Denmark, with a tiled floor, a high-end gas range and modern appliances. The chateau is furnished with many classic examples of Scandinavian modern design, which are not included in the sale but may be negotiable, Mr. Baynes said.

The remaining five bedrooms are on the second floor, including an en-suite master with   a bathroom that has a soaking tub and a bidet, and a dressing area that could be used as a bedroom. The ground floor doubles as a basement area and has a tasting room and wine shop in place.

The property has a heated swimming pool, statuary and a fountain, and a grove of olive trees where the current owners often dine alfresco, Mr. Baynes said. In addition to the winemaking buildings and cellars, there is also a two-story caretaker’s cottage. Until recently, vines were planted in front of the house, which faces the Garonne River about a half-mile away, as well as on top of a bluff above the house.

The city of Bordeaux is about 30 minutes’ drive; an expansion of high-speed train service,  expected to be completed in a few years, is expected to cut travel time to Paris to around two hours from three hours now. The Atlantic coast is about an hour away.

The Gironde department, the area around the city of Bordeaux, encompasses a number of different real estate markets, agents said. There is the city itself, an up-and-coming metropolis that appeals mainly to local buyers, but has also recently been drawing Parisians looking for both a lifestyle change and less expensive properties. The coastal area around the Bay of Arcachon draws well-heeled French buyers, with the best properties selling for well over $5 million. The region northwest of the city is given over to grand wine chateaus, where one hectare, or about two and a half acres, of vines can trade hands for more than $1 million, said Carol Young, the founder of Bordeaux and Beyond, a real estate company.

But most buyers looking for a second home tend to look to the east of Bordeaux, agents said, where they can find an abundance of historic properties, many with winemaking equipment, for about $400,000 and up. “The first hour east of Bordeaux is where most people seek to buy,” Mr. Baynes said. “That’s partly because there is a year-round life there, and very beautiful countryside and charming villages with tourist activities.”

Prices have fallen since the recession in 2008, agents said, and while the drop was arrested in 2012, there has been little increase since then. “When the market collapsed, in the Gironde, with the products that we were dealing with, I don’t think we saw dramatic price decreases,” Ms. Young said. “But the number of sales decreased dramatically.”

Anne-Valérie Colas-Devèze of Bordeaux Sotheby’s International Realty said via email that  it was too early to see the effect of the recent weakness of the  euro versus other currencies, “but one can expect a much stronger interest from Americans or Swiss in 2015 for investing in the Bordeaux area. For them, our prices have lowered by 25 to 30 percent.”

Ms. Colas-Devèze and other agents all pointed to the city of Bordeaux as an undervalued market and an area for growth in the future. “After a relatively calm first half of 2014 marked by ‘waiting,’ the Bordelais market came flying back in September,” she said. “Buyers and sellers are coming together, and we had 13 sales in a few months.”

Ms. Young said her agency was focusing more intently on the city. “With the TGV link and reduced times that are coming up, it makes it feasible for people to commute” to Paris a few times a week, she said. “The city has advanced so much in the last 10 years and it’s become a desirable place to live.”

Mr. Baynes pointed to the recent announcements that the celebrity chefs Gordon Ramsay and Joël Robuchon were setting up shop in Bordeaux as a “watershed.” “Those two coming here really says something about how solid the infrastructure is and how confident the city is,” he said. “It was a very insecure city 20 years ago — it was very heavily hit by the New World wine sales. We’ve seen it really regain its confidence.”

WHO BUYS IN BORDEAUX

The international reputation of Bordeaux’s wine has translated into a diverse client base for the region’s real estate agencies. “Bordeaux has always been and continues to be very attractive to anyone around the world,” Mr. Baynes said, citing recent sales to Australian, Chinese, British, Dutch, Belgian, American and South African buyers.

But, he added, “I would say that the people who have kept us busiest recently are the Chinese — they’re our No. 1 buyer group.” Christie’s has reached out specifically to Chinese buyers, and he said his agency employs a native Chinese vineyard expert.

In recent years, the Chinese have bought dozens of vineyards in the region, but Ms. Young said she had seen signs that demand may be slowing, citing a crackdown by President Xi Jinping of China  on capital leaving the country.

“Interestingly, Europeans have begun to take the place of the Chinese,” she said. “What they tend to be looking for is a lifestyle move, so a lot of them are concentrating on a touristic project. They’ll buy the vineyard and create a small boutique hotel or a chambre d’hôte,” in which bedrooms of the chateau would be rented out to guests.

In particular, Ms. Young said, “there’s an increasing number of buyers from the U.K. They had dropped out of the market, but now the pound is strong and they have confidence.”

There are no restrictions on foreign buyers. Ms. Young said buyers should budget 7 percent over the price of the property for closing costs, which include a transfer tax and a notary’s fee.

All aspects of the property conveyance in France are handled by a notary. Ms. Young said it was not necessary for foreign buyers to retain a lawyer, especially in the Gironde, where notaries have extensive experience with overseas buyers.