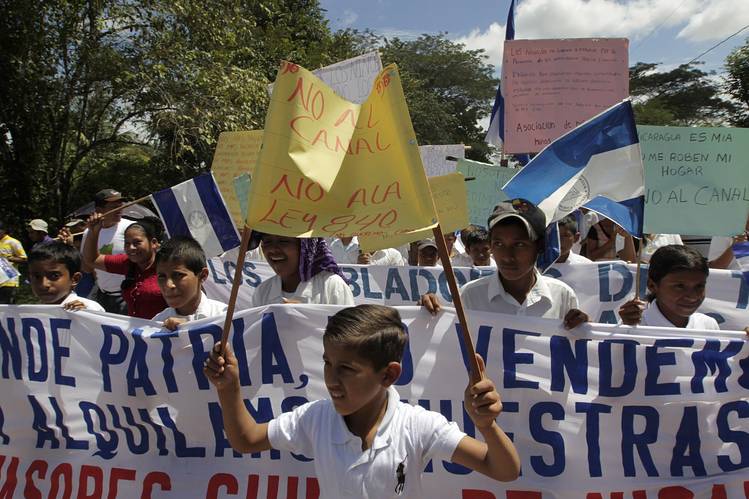 The skepticism in international maritime circles over Nicaragua’s plan to build a 172-mile canal connecting the Atlantic and Pacific oceans pales next to the anger the plan is rousing in the country. The $50 billion canal project, put together by the Hong Kong Nicaragua Canal Development Group and backed by Chinese entrepreneur Wang Jing, would take in 642 square miles for ports, roads, free-trade zones and other infrastructure. The WSJ’s John Otis writes it would displace 27,000 people, which has led to strong protests by those who fear the government will simply take away their land.

Some shipping experts say the Nicaragua waterway simply is unnecessary. An expansion of the Panama Canal is due to be completed in early 2016, allowing Panama to accommodate far larger vessels. Competition between canals around 300 miles apart would undermine the economic prospects for both operators, experts say. Still, HKND has spent millions of dollars on feasibility studies and other groundwork. Near what would be the canal’s Pacific entrance, rollers and graders are now refurbishing access roads to bring in the heavy equipment required to build the waterway. But in a statement to the Journal, HKND declined to specify when major canal construction would begin.

Amazon.com Inc. appears to be thinking outside the box—or at least about the outside of the box—as the retail industry considers how to cover the costs of e-commerce shipments. WSJ Logistics Report’s Loretta Chao writes that an agreement the online retailer struck with the Comcast Corp. Universal Pictures business and Illumination Entertainment will put characters from the movie “Minions” on bright yellow boxes Amazon will use to distribute goods in the coming weeks. Amazon won’t discuss financial details, including whether the company is getting revenue for the marketing scheme, but it’s the first time it has treated its boxes as advertising real estate. And if Amazon is reaping revenue, that may offset some of the cost of shipping online purchases—and add a new wrinkle to the company’s competition with brick-and-mortar retailers that are trying to figure out how to serve the e-commerce market and maintain profit margins.

Schoolchildren, one holding a sign saying “No Canal, No 840 law,” at a protest in Nicaragua earlier this year against the construction of the Interoceanic Grand Canal. PHOTO: REUTERS

A Navistar International Corp. bid to regain the share of the North American truck market that the manufacturer has lost since 2012 is faltering due to weak sales. The WSJ’s Bob Tita reports that Navistar’s truck business lost $51 million in the fiscal second quarter, better than the $129 million lost in the same quarter a year ago but behind where Navistar wants to be. Sales were up 4% from last year but revenue was down 2% and the company is stuck at 13% market share behind three other manufacturers. The company has been cutting costs to reduce losses, but getting back to the 20% market share it held just three years ago will mean stimulating more demand for its heavy-duty trucks.