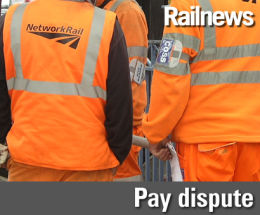 THE threat of strikes or industrial action by Network Rail has receded after the RMT’s Executive decided to hold a ballot of its members accompanied by a recommendation to accept the latest pay offer.

The union’s general secretary Mick Cash said that the General Grades Committee had decided to hold an ‘urgent referendum with a recommendation to accept the revised offer’.

Ballot papers are being distributed during the week starting 8 June.

Two forthcoming strikes were suspended after fresh talks at Acas had resulted in an improved offer from Network Rail for 2015, which includes a 2 per cent increase backdated to January.

The increase next year will be the same as the Retail Price Index, although if that is negative there would be no reduction in pay.

Other features of the latest offer include a pledge of no compulsory redundancies before 31 December 2016, accompanied by a ‘comprehensive job security package’ to be agreed within the next six months. There will also be talks on productivity in a bid to contain Network Rail’s spending.

A 24-hour strike was to have started at 17.00 on Thursday 4 June, followed by a 48-hour walkout on 9 June. Train operators and Network Rail had warned of serious disruption if the strikes had gone ahead, with no trains on many routes.