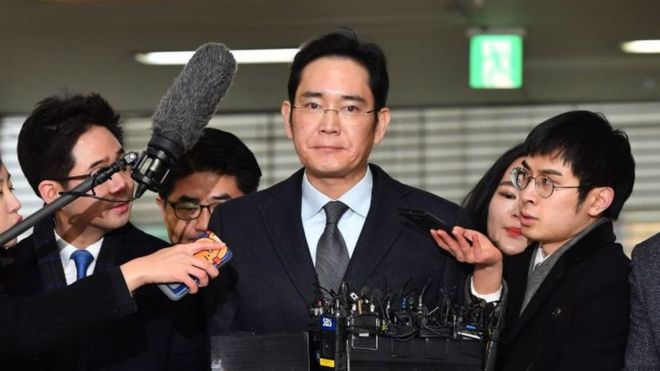 Samsung chief Lee Jae-yong has been questioned for a second time as a suspect in South Korea’s biggest political corruption scandal.

Prosecutors are expected to decide based on the hearing whether they will seek an arrest warrant for Mr Lee.

The firm is accused of giving donations to non-profit foundations run by a confidante of President Park Geun-hye in exchange for political favours.

“I will once again tell the truth,” Mr Lee told reporters before the hearing.

The Samsung chief had already been questioned with several other company executives in January but a subsequent court ruling decided there was insufficient grounds for an arrest.

Yet during the past weeks investigators reviewed the case and decided there were new aspects that required further questioning.

The claims against the company revolve around a merger between the electronics giant’s construction arm, Samsung C&T, and an affiliate firm, Cheil Industries.

The prosecution alleges that Samsung gave 2.8m euros ($3.1m; £2.5m) to a company co-owned by Park confidante Choi Soon-sil and her daughter, in return for political support for the deal.

The scandal led to President Park being impeached last December.

Lee Jae-yong, also known as Jay Y. Lee, first gave evidence in front of a parliamentary hearing in December last year. Since January he has been treated as an official suspect in the case.

At the parliamentary hearing, Samsung admitted giving a total of 20.4bn won (£16m; $17.46m) to the two foundations, but denied seeking favours in return.

And Mr Lee also confirmed the firm gave a horse and money to help the equestrian career of Ms Choi’s daughter, Chung Yoo-ra, something he said he now regretted.

Mr Lee is currently vice-chairman of Samsung Electronics. But since his father, Lee Kun-hee, suffered a heart attack in 2014, he is considered de facto boss of the entire Samsung Group conglomerate.

Politicians voted on 9 December to impeach President Park over the scandal – a decision South Korea’s constitutional court has six months to uphold or overturn.

Until then she remains formally president but stripped of her powers, which are handed to the prime minister, a presidential appointee.

Ms Choi is on trial for charges including corruption and coercion.

Ms Park’s position began to unravel in October last year when details of her friendship with Ms Choi began to emerge.

They included revelations that the president had allowed her old friend – who holds no government role – to edit political speeches.

Since then, hundreds of thousands of protestors have gathered every weekend in Seoul to demand Ms Park stands down.

Ms Park denies wrongdoing but has apologised for the way she managed her relationship with Ms Choi, who also denies committing criminal offences.