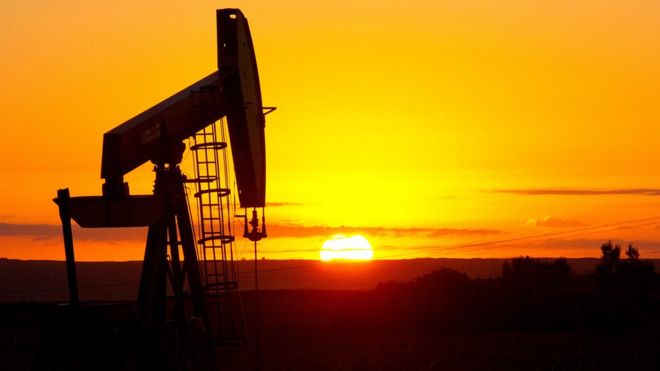 Stock markets on both sides of the Atlantic fell on Friday and oil sank further as fears about global oversupply mounted.

In London the FTSE 100 closed under 6,000 points as investors dumped commodities shares.

The International Energy Agency said the oil glut would worsen in 2016 as demand slowed and the Opec cartel showed no signs of cutting production.

Oil prices fell further, with Brent slipping below $38 a barrel for the first time in seven years to close 4.5% lower at $37.93.

Analysts said the forecast for warm weather in the US was also dampening demand.

Art Hogan, chief market strategist at Wunderlich Securities in New York, said: “About 10% of the S&P 500 is energy and commodity related, and it is a barometer for global economy. When you see such a plunge, it worries investors.”

He added: “Until the oil market finds a support level, the market will remain unsettled.”

The CBOE volatility index, known as Wall Street’s “fear gauge”, was up 19.5% at 23.1 – its highest level since early October.

Jasper Lawler, an analyst at CMC Markets, said Old Mutual was abandoned by investors because of its business in South Africa.

“The worry… is that new finance minister David van Rooyen may have been put in to ramp up spending for political purposes against the best interests of the economy,” he said.

The rand weakened further to a new record low on Friday, down more than 3%.

Mondi, a packaging and paper company with a South African division, slipped 3.1%, while the FTSE 250-listed asset manager Investec fell 10.8% after a similar fall on Thursday.

In London, shares in miners and oil companies including BHP Billiton, BG Group, Royal Dutch Shell, Glencore and Rio Tinto fell between 4% and 5.3%.

Anglo American was hit by a target price cut from Goldman Sachs and sank a further 8%.

Investors were also awaiting the Federal Reserve’s decision on interest rates on Wednesday.

“If the Fed does not move next week, it is basically saying that the recovery is not strong enough,” said Randy Frederick, managing director of trading and derivatives for Charles Schwab in Austin, Texas.

“It will definitely be a negative factor for the market.”