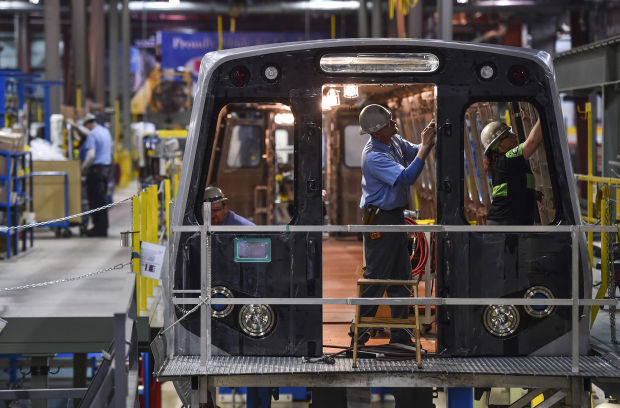 Lincoln’s metropolitan area economy is predicted to grow at a strong clip for the rest of the decade.

A report released Friday by the U.S. Conference of Mayors says the economy of the Lincoln metro area, which includes Lancaster and Seward counties, will grow more than 5 percent this year and an average of 4.6 percent a year through 2021.

The long-term projection ties Lincoln for the 106th-fastest growth rate among all the federally designated metropolitan areas, putting it well into the top one-third of metro areas for expected growth.

According to the report, which was prepared by IHS Global Insight, a company that provides economic and financial data analysis, the Lincoln area’s gross metropolitan product will grow from $17.5 billion in 2014 to $23.9 billion by 2021.

Lincoln ranks slightly better when the numbers are adjusted for inflation.

According to the report, the Lincoln metro area economy grew 3.2 percent in 2014 when adjusted for inflation, which ties for 78th-fastest growth rate in the nation. The report predicts 3.5 percent inflation-adjusted growth in 2015 and 3.1 percent growth in 2016, both well above the national average.

Eric Thompson, head of the Bureau of Business Research at the University of Nebraska-Lincoln, said the report’s projections are “not too much of a stretch.”

Thompson said he believes Lincoln and Nebraska will outperform the nation economically over the next few years, but he’s not sure it will be by as much as the Global Insight report predicts.

The report, which is 148 pages long, contains many other interesting tidbits about the Lincoln-area economy. Among them:

* If the Lincoln metro area was a country, it would have the 245th largest economy in the world, tied with African country Gabon and larger than Cambodia’s.

* The Lincoln metro area accounted for 15.5 percent of all economic production in Nebraska in 2014.

* The unemployment rate in the Lincoln metro area, currently the lowest in the country at 2.1 percent, is predicted to average 2.3 percent this year, which would be lowest among all metro areas, and then increase slightly to 2.5 percent in 2016 and 2017.