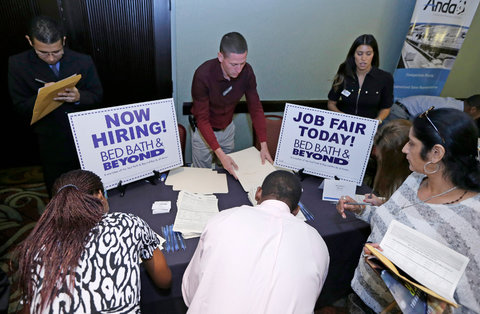 Rearview mirrors exist for a reason: to help us see what’s sneaking up on us from behind. The quarterly economic report is a rearview mirror. The latest one, released on Friday, shows that the economy contracted at an annual pace of 0.7 percent in the first quarter of 2015. Activity has picked up since then, so the tendency is strong to dismiss what is in the mirror, along these lines:

There is some truth to all of that. The problem is that “full speed” in today’s economy is too slow to generate broad prosperity. Given the dismal first quarter, the economy is set to grow at an annual rate of 2 percent to 3 percent for the year, its pace through much of the recovery that began in mid-2009. That is enough to deliver lopsided results, in which income and wealth accrue to those at the top of the economic ladder. It is not enough to pull up wages and salaries for everyone else.

A proximate cause for the first-quarter contraction is the worsening trade deficit driven by the strong dollar, a trend that is likely to continue in the months to come. The economic drag of large trade deficits could be curbed by cracking down on currency manipulation by the nation’s trade partners, but the trade deals currently being pushed by the Obama administration are not expected to contain enforceable currency provisions.

The overarching cause of the economy’s inability to achieve and sustain robust growth is the continued failure to employ everyone who wants and needs a job.

There has been a lot of justifiable high-fiving about the steady fall in the unemployment rate, to 5.4 percent recently. But joblessness is still higher than it was before the last recession began at the end of 2007. Unemployment is still above the pre-recession levels in Washington, D.C. and 36 states, including California, Illinois, Indiana, Maryland, Massachusetts, New Jersey and New York.

Despite steady if lackluster economic growth, job prospects are still rocky even for recent college graduates. The average unemployment rate in the past year for college grads ages 21 to 24 was 7.2 percent, compared to 5.5 percent in the pre-recession year of 2007. Their underemployment rate, which includes those who do not have full-time hours, is 14.9 percent, compared to 9.6 percent in 2007.

The economy is in much better shape than it was a few years ago. But it is still ailing. Healthy growth requires healthy employment with rising wages. Those, in turn, require economic policies including continued low interest rates, more federal spending on job-creating infrastructure projects, balanced trade and programs to help those who face special hurdles to employment, including immigrants and people with prison records.

The economy will rebound in the second quarter. But it is not yet on its way to full employment, which is the only way to broad prosperity.