Skip to content
INDUSTRY
May 18, 2015 swarnali 0 Comments The Republicans’ dumb ‘no bailout’ pledge 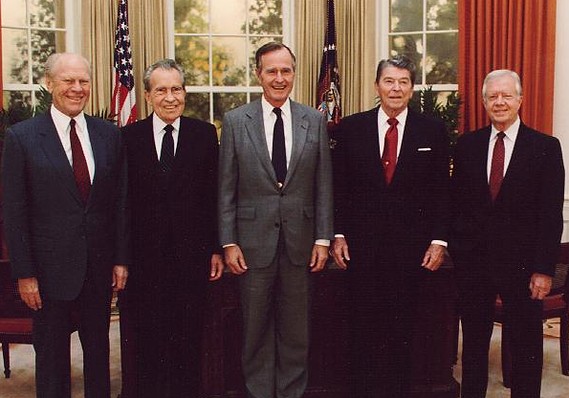 One of the dumber ideas making the rounds of the Republican campaign for president is the “no bailouts” pledge that GOP candidates are being asked to endorse. Along the lines of the “no tax” pledge made famous by Grover Norquist, the self-proclaimed enforcer of electoral pain to any Republican violator, the concept of this latest pledge presumes that bailouts—like taxes—inflict more economic harm than good.

This is debatable, but first two broader points: 1) in times of crisis–economic or otherwise–savvy politicians always keep their options open, and 2) taxpayers elect politicians to protect their interests. Which helps explain why Republican presidents Richard Nixon, Gerald Ford, Ronald Reagan and George H.W. Bush (also Democrat Jimmy Carter) backed bailouts of everything from banks, defense contractors, automakers, the housing industry and airlines long before the economic meltdown of a decade ago caused the second President Bush and Barack Obama to bail many of them out again.

Each of these five Republican and two Democratic presidents understood that preventing further economic disruption, including massive job losses, transcended today’s Republican insistence that politicians must adhere to rigid political dogma and do nothing.

Ronald Reagan’s son Michael today acknowledges that his dad—who signed off on multiple tax hikes during his presidency —couldn’t win the Republican nomination today for president. It was the Gipper himself who said, in his first Inaugural address “How can we love our country and not love our countrymen; and loving them, reach out a hand when they fall, heal them when they’re sick, and provide opportunity to make them self-sufficient so they will be equal in fact and not just in theory?”

I’ll go back even further in time and say that even Abraham Lincoln might be drummed out of today’s GOP. Abe had the nerve to say that Republicans “are for both the man and the dollar; but in cases of conflict, the man before the dollar.”

Can you imagine any Republican daring to echo these words of Lincoln or Reagan today?

Words and dogma aside, Republican inflexibility on bailouts (and taxes) is also obtuse for two economic reasons. First: Why box yourself in policy-wise, when you don’t know what the next crisis will be like, or when it will occur? Few anticipated the subprime crisis of a decade ago, or the terror attacks of 9/11 that hurt the airlines. No one saw the accounting scandals (Worldcom, Enron), the meltdown of Long Term Capital Management in 1998, the 1989 savings and loan crisis, Continental Illinois five years before that, and on and on. They were all different. In the face of such uncertainty, saying ahead of time what you won’t do is just plain dumb. It’s like a surgeon announcing ahead of time that he won’t administer any blood transfusions to a patient who’s bleeding from an accident.

Republicans think the world is binary: Things are either good or bad. In the real world, things are a tad more complex. And if you look at government intervention by past Republican presidents—again, all the way back to Nixon—the results from past bailouts have been better than the current, simplistic thinking implies.

The second reason is this: since the past has shown that it’s impossible to predict when or in what form the next financial crisis will erupt—and there will surely be one—why take one remedy off the table when there are so few others at your disposal?

Here’s the question for Bush, Cruz, Rubio, Walker, et al.: Instead of saying what you won’t do, what will you do? If we had another meltdown and bailouts are out, what’s left? How would you stimulate the economy? Bailouts are out, OK. But we can’t cut rates—the Fed Funds rate has been near zero since December 2008. Stimulus spending? That’s out as well.

This suggests that rather than do what every Republican president of the past 40 years has done—minimize pain to the citizenry (i.e. voters)—they’d let the market take its course, and let the chips fall where they may. The presumption that the Bush bailouts (Fannie/Freddie in August 2008, TARP in October 2008 and the beginning of the auto bailouts in December 2008) or the Obama stimulus (February 2009) made things worse than letting the economy crater is just ivory tower rubbish. It may sound good in a quick soundbite to TV viewers, but in the real world, it’s just plain dumb.

There was one Republican president who, in the face of an economic meltdown, thought that keeping the government largely on the sidelines was the way to go. That stubbornness didn’t work out too well for Herbert Hoover—or the economy. Four years after the stock market crash of October 1929, one in four Americans were out of work, millions list their homes, and living standards plunged.

A little flexibility and willingness to deviate from stubborn dogma might have helped. Instead, Hoover thought it best to let market conditions run their course. The only thing that was run was Hoover himself—out of office the first chance voters got. Much to the chagrin of Republicans, the next five presidential elections would be won by Democrats.

Republicans have already lost the popular vote in five of the last six presidential elections. Their stubborn, inflexible talk, ignorance of history—including that of prior GOP presidents—could soon make it six out of seven.