Skip to content
COMPANIES
June 17, 2015 Joy Mitra 0 Comments $500 million plant with India’s Welspun Energy, Indian products to export to the US, rankings will be an uphill task given the current progress 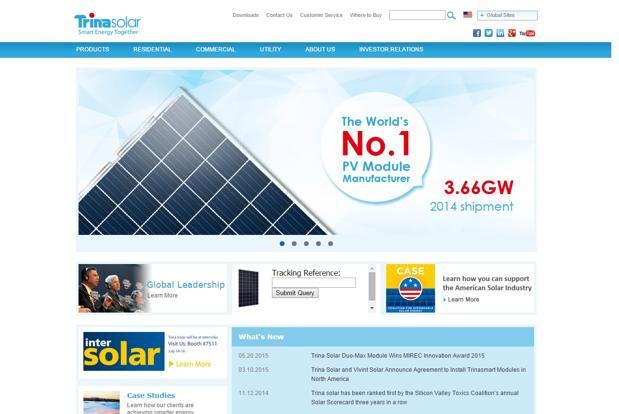 New Delhi: Trina Solar Ltd will invest in a $500 million plant with India’s Welspun Energy Ltd as the world’s biggest supplier of panels seeks to circumvent US and European Union sanctions on solar shipments from China.
The 2-gigawatt facility will be in either Gujarat or Andhra Pradesh, Zhiguo Zhu, senior vice-president of Trina Solar, said in a phone interview. Construction of the plant, planned in two phases, will take about 18 months, Zhiguo said. “We’ll use Indian products to export to the US or even Europe,” Zhiguo said.
Driven by the policy barriers, Chinese companies are setting up capacities globally. Southeast Asia is attracting the most investors, with advantages of low labour costs, local policy incentives and proximity to China, the source of the most raw materials, according to Bloomberg New Energy Finance.
Global renewable energy companies are flocking to India after Prime Minister Narendra Modi in November set a national target of installing 175 gigawatts of clean power by 2022, an almost fivefold increase from the current installed capacity. India has 11 of the top 20 cities with Earth’s worst air quality, the World Health Organization (WHO) said in May 2014.
Trina expects demand of as much as 600 megawatts in India this year, the executive said.
“Next year, India will become our third-largest market,” Zhiguo said. “In future, it could become our biggest after China.”
Changzhou, China-based Trina Solar and Welspun Energy of New Delhi signed an accord in May during Modi’s visit to China to jointly set up a photovoltaic industry park in India.
Welspun Energy managing director Vineet Mittal is travelling and can’t be reached for comment, his office said.
China will lead the world’s solar demand this year with 17.5 gigawatts, followed by Japan with 11.48 gigawatts and the US with 8.78 gigawatts, BNEF said in its 2015 forecast. India will probably come in fifth with 2.5 gigawatts.
“India could become the fourth-largest market next year although climbing further up in rankings will be an uphill task given the current progress,” BNEF solar analyst Bharat Bhushan Agrawal said. Bloomberg
[“source – livemint.com”]