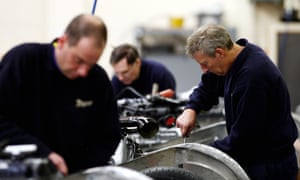 Britain’s economy stalled in the three months to October following steep falls in the manufacturing and construction industries, according to the last official economic data before voters head to the polls on Thursday.

The Office for National Statistics said its monthly assessment found that a broad swathe of the UK’s industrial sectors struggled in the autumn months to leave GDP growth at zero.

Only the services sector showed signs of growth and the ONS emphasised that the areas where activity was still modestly higher were in estate agencies, the health sector and professional, scientific and technical activities.

Highlighting the weakness of the economy, year-on-year growth in GDP slowed to 0.7% in October, which was the lowest rate of growth since March 2012.

Manufacturing output shrank for the seventh month in a row according to the ONS measure of how much industries add to GDP growth, as factories battled against Brexit uncertainty and a flagging global economy.

Without an increase in energy production to combat unusually cold weather in October, the UK’s industrial sector would have fallen further and sent the overall measure of GDP into a second quarter of contraction this year.

John McDonnell, the shadow chancellor, said it was shocking that manufacturing had been neglected by the government and allowed to suffer the worst effects of Brexit uncertainty.

“We can look forward to five more years of economic failure and stagnation if the Conservatives win the election,” he said.

Liberal Democrat spokesman Ed Davey said: “Boris Johnson’s pursuit of Brexit is causing the economy to grind to a halt, and the most vulnerable will be hit hardest if he isn’t stopped.”

Some commentators highlighted the improving situation that recorded a –0.2 contraction in August and -0.1% drop in September become zero in October.

But with the jobs market showing marked signs of slowing and wages growth coming down from 4% to 3.6% in the last three months, the slowdown since the start of the year appeared to be affecting all parts of the economy.

Fhaheen Khan, a senior economist at Make UK, the manufacturers’ organisation, said the data showed the services sector, which expanded by 0.2% in October, cannot alone promote economic prosperity in the UK.

“The only [industrial] sectors which saw growth were pharma and food and drink, both of which will have been boosted ahead of Christmas,” he said.

“Overall, a weakening of the manufacturing sector has hampered growth and measures to unlock the growth potential of the sector through a reinvigorated industrial strategy must be a key feature for policy makers next year,” he added.

The pharmaceutical industry was one of the bright spots following a 0.11 increase in output. But this was down from a 0.42% rise in March when firms were stockpiling medicines ahead of the first Brexit deadline.

Only the oil industry and the makers of computer, electronic and optical products produced more among the UK’s industrial sectors in October than in March, the ONS said.

The consultancy Capital Economics said the stagnation in GDP in October was unlikely to influence many people’s vote in Thursday’s election, but it could prompt more members of the Bank of England monetary policy committee to consider voting for lower interest rates in the coming months.

“This growth was driven by strength in professional, scientific and technical activities, wholesale trade and health, and was partially offset by weakness in office administrative and support activities,” it said.