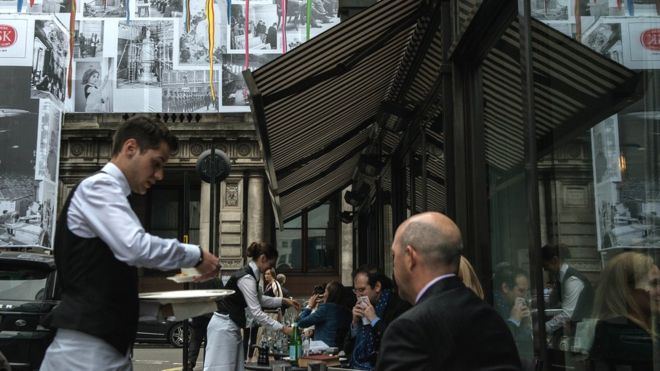 The UK service sector grew at its fastest pace for 17 months in December, a closely watched survey has indicated.

The Markit/CIPS services purchasing managers’ index (PMI) rose to 56.2 last month, from 55.2 in November – the highest level since July 2015.

But inflationary pressure in the sector continued, with prices charged rising at the strongest rate since April 2011.

Services, which include areas such as retailing and banking, make up more than three-quarters of the UK economy.

“At face value, this improvement suggests that the next move by the Bank of England is more likely to be a rate hike than a cut,” he added.

However, Mr Williamson, Markit’s chief economist, said policymakers were “clearly concerned about the extent to which Brexit-related uncertainty could slow growth this year”.

As a result, he said, the Bank’s Monetary Policy Committee would have to consider “the current resilience of the economy” alongside “elevated levels of uncertainty”, meaning that interest rates could go either way.

Earlier in the week, surveys in the construction and manufacturing sectors indicated a similar pattern of growth. Mr Williamson said that collectively, the surveys pointed to GDP growth of 0.5% in the fourth quarter of the year.

The “all-sector” PMI rose to 56.4 in December from 55.1 the previous month – itself the highest reading since July 2015. A figure above 50 indicates expansion.

“Further changes in the wider political landscape in early 2017 are likely to ask more questions of the robust UK economy, with its response anyone’s guess.”

At the same time, a survey by the British Chambers of Commerce indicated that there had been “continued expansion” for both manufacturing and services in the final three months of the year, but “at a lower level for the services sector than before the EU referendum”.

The BCC said: “Firms in both sectors, particularly in manufacturing, are facing pressure to raise prices, principally as a result of the cost of raw materials and other overheads.”

Dr Adam Marshall, the BCC’s director general, added: “Overall, our findings suggest growth will continue in 2017, albeit at a more modest pace.

“The government must act strongly this year to support investment and improve the business environment – both of which are crucial to boosting business confidence, and therefore further growth.’