Wall Street failed to maintain its post-payrolls report upward momentum but stock markets across the Atlantic found some support from strength in the mining sector after another cut in Chinese interest rates.

But the mood in Europe was also tinged with uncertainty as eurozone finance ministers met once again to discuss the release of much-needed funding to Greece, a day before a €750m repayment by Athens to the International Monetary Fund falls due.

The pan-European FTSE Eurofirst 300 inched up 0.3 per cent as the mining sector gained 2.6 per cent, although individual stock indices across the region were mostly weaker. The Athens General index shed 2.5 per cent and Greek bond yields rose.

The Nikkei 225 in Tokyo rose 1.3 per cent but the standout performance in Asia came from Shanghai where the Composite index jumped 3.1 per cent — recouping some of last week’s 5.3 per cent decline. 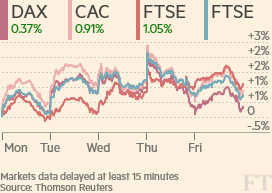 On Sunday, the People’s Bank of China cut its benchmark lending and deposit rates by 25 basis points to 5.1 per cent and 2.25 per cent, respectively — the third easing in six months — and said the deposit rate ceiling would be expanded to 150 per cent of benchmark from 130 per cent.

The move followed the release of weaker than expected Chinese inflation data on Saturday.

“We think the persistent deflation risk and the still-elevated lending rates point to the need for more monetary easing,” said analysts at Barclays.

“As such, we look for further benchmark rate cuts of at least 50bp and two more [bank] reserve ratio requirement cuts by the third quarter, accompanied by a complete removal of the deposit rate ceiling.”

The PBoC’s move stood in stark contrast to the US, where last Friday’s broadly reassuring non-farm payrolls report appeared to remove any lingering talk of a June rate rise — but left most in the markets expecting an increase before the end of the year.

Lee Hardman, currency analyst at Bank of Tokyo-Mitsubishi UFJ, noted that the lack of evidence in the payrolls report that tightening labour market conditions were resulting in higher wage growth — in contrast to an acceleration in wage growth over the past year shown by the Employment Cost Index.

“Overall, the payrolls report is likely to support the Fed taking another small step towards tightening monetary policy but is not strong enough to prompt the market to materially bring forward first rate hike expectations from the end of this year,” Mr Hardman said.

“As a result, the non-farm payrolls report is helping to support the US dollar in the near term.”

The dollar index, a gauge of the US currency ’s value against a basket of peers, was up 0.2 per cent and hovering just above 95, viewed by some analysts as an important support level.

The Bank of England said it had kept interest rates unchanged, after delaying the announcement from last Thursday’s meeting because of the election.

The euro, meanwhile, was down 0.4 per cent against the dollar at $1.1156 as the region’s focus returned to Greece’s troubles.

The country’s finance ministry said it had ordered the €750m payment to the IMF to be made.

The move followed warnings on Sunday from several Greek officials that the government was planning to withhold the payment if eurozone finance ministers were unable to deliver a positive statement from the latest eurogroup talks.

There was no evidence of market uncertainty spurring demand for German government bonds, however.

The 10-year US Treasury bond yield reversed Friday’s payrolls-fuelled drop to stand 11bp higher at 2.26 per cent ahead of the sale of $64bn of new debt this week.

Oil prices continued to retreat from Wednesday’s 2015 highs. Brent settled at $64.91 a barrel, down 0.7 per cent — after rising to within sight of the $70 mark last week — and US West Texas Intermediate was 0.4 per cent lower.

The firmer tone of the dollar and the rise in Treasury yields kept gold on the back foot with the metal down $4 at $1,183 an ounce.