woman is doubled over on a platform, clutching her stomach. She screams, then flops 4.5 metres (15ft) on to a giant airbag. To my left, a dozen people are darting through a maze of cardboard boxes, yelling and pretending to fight each other. On the other side of the hall, an explosion is being replicated – a group of people sprint forward only to be violently yanked backwards on to crash mats.

Everyone here today is seeing if they really want to become a stunt actor. “The training costs a lot of time, money and commitment, so why go through all that just to discover this isn’t what you want?” says Tony Lucken, a trainer on the course with more than 26 years’ experience. The most reliable route into the industry in the UK is through the elite British Stunt Register. A candidate has to achieve qualifications to the required level in six disciplines, including gymnastics, trampolining, diving, horse riding and driving, and a mandatory martial art. The training itself costs about £30,000. “It’s not something that you just have a go at,” says Ben Dimmock, a stunt performer and stunt coordinator who has doubled for Matt Damon as Jason Bourne.

But as hard as it is to break into the British stunt industry, it has been especially difficult for women to work in what was predominantly an all-boys’ club. As of September, there were 394 members of the British Stunt Register, 62 of whom were women.

Tina Maskell has been a stunt actor for 38 years. She doubled for Judi Dench on Skyfall and Dawn French on the Vicar of Dibley, although she assures me that French fell into that puddle herself. “When I came into the industry there were only seven women. We serviced the whole of the industry,” Maskell says. “There were more opportunities because there were so few of us. Now it’s a very different story.” Maskell adds that unless you are a perfect double for someone, you might find it difficult to get work, but, overall, more doors have opened for women.

She says it can be difficult for female stunt actors to start a family, as there is no maternity pay in the industry. As a result, Maskell was still performing stunts when she was six months pregnant – she never told her employers. “I wouldn’t recommend it,” she says. “I did jump a car into a lake during my early pregnancy and the gentleman in the car with me – the late Roy Alon – got out of the car and I told him: ‘There were three of us in that car.’” Maskell regrets it now. “It wasn’t the correct way. It could have caused problems. I would say to women: ‘Take time out and enjoy the baby.’”

There are currently only two black women on the British Stunt Register. Shaina West, a 24-year-old aspiring stunt performer from Brixton, south London, wants to become the third. After her martial arts talents were featured in a promotional video for Star Wars: The Last Jedi, in which she entered into a lightsaber battle in a car park – she has become something of a social media celebrity. Her videos practising acrobatic kung fuamid a whirling blur of intricate swirls of a wooden staff are watched by her hundreds of thousands of followers. 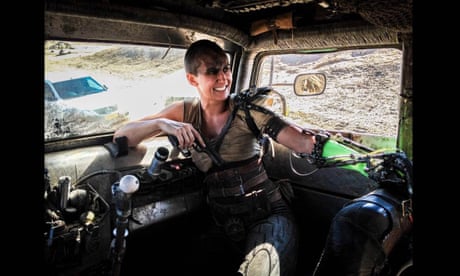 “I’ve always been into action films, video games, comic books and strong characters who overcome adversity,” she says. “I’m not very close [to qualifying] at the moment. I am self-taught, and haven’t been through any official training. It will take me three to four years – minimum – to reach the level required. It’s very expensive and for someone like me, it’s difficult to acquire these skills,” she adds. She is determined that when she gets there, she will ensure she encourages other women of colour to put themselves forward for the job.

So why are there so few women in the stunt industry? Many point to the practice of “wigging” – which is when male stunt actors play female characters. Deven MacNair, a Los Angeles-based stuntwoman, is believed to be behind the first ever legal challenge against this practice; she made a complaint against a production company and the Screen Actors Guild to the US Equal Employment Opportunity Commission after witnessing a “wigging” incident on set at The Domestics in 2016. She believed that she would be doing a car stunt for the actor Kate Bosworth in the film, but it was instead performed by the stunt coordinator Nick Gillard (famed for his work on the Star Wars prequels) in a wig and women’s clothes. Gillard says he did it for safety reasons, after friends in the industry told him he shouldn’t let her “anywhere near” a car stunt. “My main job as a stunt coordinator is to ensure the safety of cast and crew, and if that involves me doing the stunt, then that is what will happen,” he wrote to her in an email.

There is no equivalent of the British Stunt Register in the US, so getting a foot in the door depends on knowing the right people. MacNair believes her complaint has had a negative effect on her career. While she still gets work as a stunt coordinator, she has worked for just three days as a stunt performer since the complaint. “All I said was, ‘Where is this stuntwoman? Why is there a man in a wig?’” she says.

The Screen Actors Guild – American Federation of Television and Radio Artists launched an investigation into wigging after her complaint, which concluded that the practice is “not acceptable and that this should not happen again”, but it did not fine The Domestic’s production company. MacNair says women contact her regularly sharing allegations about TV and film productions, ranging from sexual harassment to workplace discrimination, yet they won’t go public. “Keep in mind that these are the strongest, most badass women in America and they are silent,” MacNair says. “They’re getting raped, sexually harassed, sexually assaulted and they’re losing work.” She adds: “I tell the women: ‘What are you scared of? Less work? They’re already not hiring you. You’re barely making a living anyway because the men make sure they keep the jobs for themselves.’” MacNair is pursuing a class action against MGM.

If very powerful women in Hollywood haven’t felt empowered enough to come forward about sexual misconduct until relatively recently, then it’s perhaps unsurprising that women behind the camera are yet to have their MeToo moment, staying silent out of self-preservation. MacNair emphasises that she has never been assaulted and it is not her intention to tarnish the reputation of stuntmen. “Many if not most are great men, but they stay silent, too. They know who the bad guys are. If you’re willing to stay silent, you’re willing to protect the guilty.”

Other women, such as Jwaundace Candece, a stuntwoman based in Atlanta, Georgia, have taken matters into their own hands. Candece set up the Stunt Performers of Color, a website that provides a database designed to help stunt coordinators match the right profiles for roles. “People say they can’t find people of colour to do the stunts, so I wanted to create awareness,” Candece says. “Our website has more than 150 performers of colour from the US and Canada that they can choose from. If they continue to wig or double, I don’t know why, because we are out here,” she adds. Candece, who began her career as a professional wrestler for Women of Wrestling, also carried on performing during her pregnancy. “If you get pregnant, they somehow think you’re pregnant for two or three years. So, I didn’t tell anyone,” she says. Candece wasn’t “showing” and carried on working for up to six months. She then took three months off after giving birth and returned to work. “I felt like, as women, that is something we have to do. Suddenly people were like: ‘Oh, you had a baby.’ And now my son is eight and I see all these other [stunt]women with kids; they did the same thing.”

Despite the challenges women, especially black, Asian and minority ethnic women, face in the stunt industry, West says blockbuster film franchises such as Black Panther and characters including Michonne from the Walking Dead have given her confidence to achieve her goals. “I don’t have to make a lot of effort to look like these characters, because that’s what I look like. In an age where black women go through a lot to change how their hair looks to conform to beauty standards, it’s refreshing and magical to see characters who look the way I look in my natural state.”

West is conscious of the fact that the industry is male dominated, but she feels that could work in her favour. “If there aren’t as many females, especially black females in the industry, that will give me more of a niche and more of an advantage. I’ll stand out more. I’m not just another man breaking into the industry who will probably have to come up with an edge. I’m just going to do the best that I can and let my performance speak for itself.”