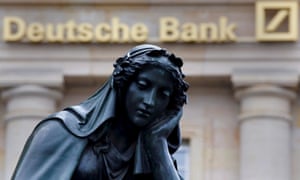 Deutsche Bank is facing questions about whether it can afford a penalty of $14bn (£10.5bn) from the US Department of Justice for mis-selling mortgage bonds a decade ago. Shares in Germany’s biggest bank have sunk to near-30-year lows and are trading just above €10 a share, illustrating investors’ concerns that they will be asked to bolster the institution’s coffers through a cash call.

Shareholders are in turn wondering whether the bank should have acted sooner to preserve its financial health and whether the German government will step in to prevent a collapse.

How did it come to this?

Once a big beast of the banking world, Deutsche Bank is grappling with a string of problems that are raising questions about its need to gain more funds in order to survive.

John Cryan, the Briton who took the helm at the bank 14 months ago, already faced a daunting task in turning around the bank even before its situation worsened in the face of reports it could face a $14bn penalty from the US Department of Justice for bond mis-selling.

Cryan is tackling the problems in the investment banking arm that generated 85% of its revenue but lost its shine after a string of scandals – including a £1.7bn fine for rigging Libor – hit the bank. The reputational hits were accompanied by new regulations put in place after the banking crisis that made it tougher for banks to make profits. The bank’s costs are also too high, so Cryan has embarked on a plan to axe a quarter of the workforce and raise capital by selling its Chinese arm and retail business Postbank.

However, matters have been complicated by a prolonged low interest rate environment, which has made Deutsche Bank investors realise it would be difficult for the bank to generate as much revenue as it did in the past. It also expected the penalty for mortgage bonds mis-sold a decade ago in the US to be closer to $2.5bn.

“[Deutsche Bank] finds itself in the position it is because of a failure to shrink its balance sheet, cut costs and restructure when times were good,” said Tim Crockford, European equities portfolio manager at fund manager Hermes.

Why does Deutsche Bank matter?

The bank’s assets are valued at about €1.8tn (£1.5tn), which is half the size of the German economy. This illustrates the size and scale of the bank.

Even before the bank’s latest crisis emerged, the International Monetary Fund had been sounding the alarm about the significance of Deutsche Bank on the world stage, saying it “appears to be the most important net contributor to systemic risks”. It is a key player in the market for derivatives, which are complex financial instruments used in a range of activities from insuring against interest movements to taking bets on stock market movements. These products were at the heart of the 2008 global crisis when a collapse in US property prices hit valuations of certain derivatives.

What would happen if it collapsed like Lehman Brothers did?

On the basis of the IMF’s assessment, the consequences of a Deutsche Bank collapse could be worse than the signature event of the global banking crisis. However, few are predicting that the bank will go the way of Lehman. Christopher Wheeler, banks analyst at Atlantic Equities, points out that Deutsche Bank is not running out of cash, as it has €250bn of readily sellable assets it can sell to meet any demands from customers.

Shareholders are alarmed, though. Deutsche Bank’s shares have fallen more than 50% this year and so far that its stock market value is now approximately €14.5bn – or in dollar terms barely $2bn more than the proposed $14bn penalty.

Will the German government bail out its flagship bank?

This looks unlikely. Angela Merkel, Germany’s chancellor, would not want to prop up a bank that survived the 2008 crisis without a bailout. And even if she wanted to do so, new rules mean bond holders would be forced to take losses first. But if it was a last resort, analysts have said they expect her to intervene.

What are the options?

The one that shareholders fear is a cash call on shareholders, although the shares have fallen so low that any capital raising would dilute existing investors. The market reckons Deutsche can afford a DoJ settlement of up to €6bn without raising cash. Other options involve more restructuring.

Crockford said: “One option would be to sell asset management, or other parts of the business that have a more attractive return profile than the core business and investment bank, such as private wealth management.”