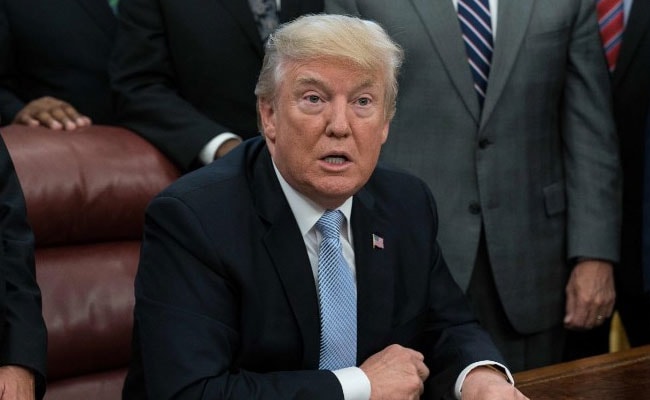 Washington: United States President Donald Trump has said that he would bring in a new tax regime in the US that will induce American businesses to bring back “trillions of dollars” stacked abroad. “We must bring back trillions of dollars in wealth that’s parked overseas, and just can’t come back. Our tax system penalises companies that bring wealth they have earned overseas back to America,” he said while addressing an audience in the US state of North Dakota on Wednesday.

He said that due to the current tax system “corporations have parked trillions of dollars in foreign countries, money that could be and should be brought back into the United States, where it can be invested in American companies and American jobs”.

Mr Trump said his tax plan will give these companies a chance to bring back the funds from abroad, and spend them in cities and towns all across the country.

“The numbers we’re talking about are probably between $3.5 trillion and $5 trillion that cannot come back into our (country),” he said.

Asking people to support his tax reforms, he said this is a “once-in-a-generation opportunity” and to rebuild the American economy.

“History has proven time and time again that there is no power on Earth more awesome and unstoppable than the will of the American people. You saw that on November 8th, believe me,” he added.

The president said the US business tax rate is the highest in the developed world, 60 percent higher than its foreign competitors.

“(This) puts us at a big disadvantage. We’re behind France, behind Germany, behind Canada, Japan, Ireland, Mexico, behind South Korea. We’re dead last. Our high business tax is nothing more than a crushing tax on every product made in America. We have totally surrendered our competitive edge to other countries,” he said.

Mr Trump said that his government is going to reduce the tax rate on American businesses so they can keep the jobs in the country, which would create employment, higher wages and greater profits.

The administration will no longer have to accept a tax code that lets special interests win at the expense of the middle class, he said.

“We no longer have to accept a rigged system. You know all about rigged systems. We talked about that plenty times in the campaign. You think anything is so different? But we’re going to make a difference. We’re going to get that straightened out too,” he noted.

“That rewards companies for shipping jobs overseas and punishes them for investing in America. They actually get punished under the tax code for investing in our country. It’s all going to change. We can heal this self-inflicted wound and we can reestablish our economic dominance all over the world,” Mr Trump said.