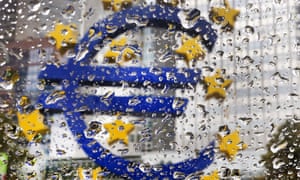 The European Central Bank has vowed to continue with its programme of electronic money printing to shore up the eurozone recovery but surprised financial markets by reducing the amount of stimulus it expects to provide each month.

The single currency bloc’s central bank left interest rates unchanged and said it would continue its programme of quantitative easing (QE) to next December or beyond “if necessary”, marking an extension to its previous guidance that the scheme would run until the end of March.

However, the value of the bonds bought by the ECB per month under the QE programme will drop to €60bn (£51bn) from April next year, from €80bn currently. The ECB’s QE scheme involves creating electronic cash to buy sovereign and corporate debt to counter anaemic economic growth and low inflation.

ECB president Mario Draghi insisted the central bank would remain ready to beef up its support for the eurozone economy as needed and rebuffed suggestions the plans for more modest bond-buying from next spring represented “tapering”, a process by which QE is wound down.

“There is no question about tapering. Tapering has not been discussed today,” he told a news conference after the latest ECB policy meeting.

Draghi has previously talked about doing “whatever it takes” to support the currency bloc and on Thursday sought to send a similarly reassuring message.

He said the policy of low rates – the ECB’s main interest rate is at zero – and QE was supporting demand in the eurozone and the economy was expected to continue growing at a “moderate but firming” pace. But if things took a turn for the worse, and inflation failed to pick up enough, the ECB could increase its bond-buying again and/or extend the scheme, he added.

The ECB’s own inflation outlook suggested such moves to increase bond-buying could well be warranted. It is forecasting inflation of just 1.3% next year, 1.5% in 2018 and 1.7% in 2019. When asked if that counted as meeting the ECB target of inflation below but close to 2%, Draghi said: “Not really, so we have to persist.”

The central bank is expecting only modest economic growth for the eurozone over coming years. It believes GDP growth this year will come in at 1.7%, will match that pace again in 2017 and then ease to 1.6% in 2018 and 2019.

Jennifer McKeown, at the consultancy Capital Economics, noted how the ECB’s language reflected a climate of heightened political uncertainty.

“Presumably, the Bank has been encouraged by signs that the economy is performing well in the face of political uncertainty at home and abroad. However, it clearly remains in cautious mode,” she said.

“In all, we see a significant chance that the ECB will have to increase the pace of its asset purchases again next year. And even if it does not, policy will be far more supportive than in the US, leading the euro to depreciate further.”

Draghi flagged up that uncertain climate in his press conference, referring to upcoming elections in France, the Netherlands and Germany.

“Just look at the election calendar for the year to come. That is by itself a source of uncertainty. Look at the rest of the world. Look at what is happening with the emerging market economies,” he told reporters.

He also echoed other central bankers, including Mark Carney at the Bank of England, as he repeated calls for governments to play a bigger role in driving economic recovery with moves such as improvements to infrastructure and productivity.

Many investors had been hoping for an extension of QE at the same pace, rather than the reduction announced by the ECB and there were sharp moves on financial markets as traders struggled to make sense of the central bank’s stance.

The euro initially jumped and then fell back. Yields on government bonds, which move inversely to prices, climbed as traders reacted to the prospect of lower ECB demand from April. Stock markets rallied as bank shares in particular benefited from hopes that a period of ultra-low interest rates might be finally nearing an end.

The ECB also used its latest meeting to relax the rules over which bonds it can purchase under QE, reflecting worries that after years of QE it could run out of assets to buy.

The changes to the QE programme follow criticism from Germany that loose monetary policy in the eurozone was hurting savers and fuelling rightwing nationalism. In the past, Draghi has rebuffed those attacks and stressed low rates and QE were needed to get inflation back to target. On Thursday he reiterated that the ECB was not biased towards the currency bloc’s less prosperous southern states.

While Draghi was at pains to reject suggestions the ECB was tapering, many market commentators said the central bank was in fact doing just that.

“The ECB’s announcement, in our view, continues a trend among major central banks of moving away from ever-looser monetary policy stances.”

Others highlighted the ECB’s apparent attempts to keep all camps happy.

“The announcement had something for just about everyone. Those looking for a tapering would welcome the forthcoming drop in the monthly purchase amount,” said Grant Lewis and Mantas Vanagas at Daiwa Capital Markets.

“But others will welcome the fact that the total additional amount of purchases is larger than if the ECB had simply announced a six-month extension of its current purchase pace.”