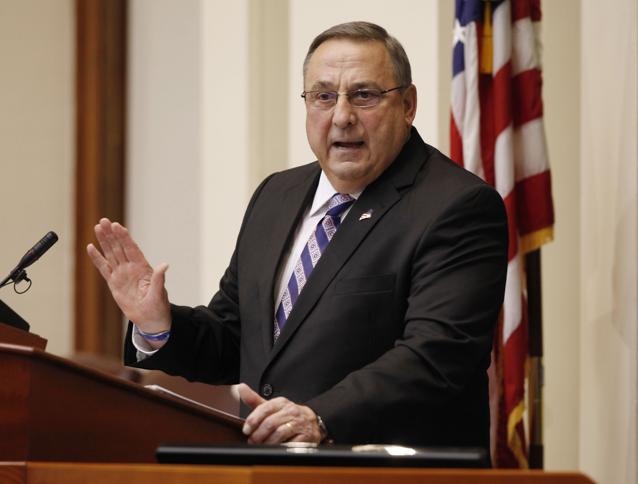 Maine Governor Paul LePage is unwilling to accept the status quo when it comes to his state’s economic future. While in the past he’s proven willing to play the long game by accepting gradual cuts, a simple reduction is not the Governor’s goal. He’s taken a firm stand, announcing a bill to eliminate the state income tax by 2020.
Of course, LePage’s bold trajectory is not surprising. During his State of the State address in February of this year, the Governor said unequivocally: “My vision for Maine is a Maine without an income tax.” He further demonstrated his commitment to meaningful reform, explaining that the income-tax elimination must become permanent via a Constitutional amendment. Taking this ironclad step would, LePage reasoned, “remove the burden that the personal income tax places on Maine families – from retirees on fixed incomes to job creators.”

At present, Maine isn’t a top destination for those job creators. According to the nonpartisan Tax Foundation’s 2015 State Business Tax Climate Index, the quality of Maine’s tax climate is far from impressive, coming in at 33rd in the nation. Even worse, the state’s property tax burden is the tenth worst in the nation; the corporate tax burden is the fifth worst.

With realities such as these, it’s crucial that a leader such as LePage takes action to level the playing field and make Maine attractive to workers and the job-creating businesses that employ them. By eliminating the income tax in favor of other, more benign forms of taxation, such as broad-based consumption taxes, Maine could keep more of the net adjusted gross income that currently flees to states like Florida (which levies no state income tax and siphoned off nearly $826 million of Maine’s net AGI between 1992 and 2011).
In the book I co-authored, An Inquiry into The Nature and Causes of the Wealth of States, we looked at moving companies’ record over the last five years. Neighboring New Hampshire, a no-income tax state, has been classified as an inbound state, determined by having more than 55 percent of all shipments going into a given state. In fact, New Hampshire holds the distinction of being the only inbound state in New England with the population growing by 6.5 percent between 2000 and 2010. Despite being a small state in a slow-growing region, New Hampshire consistently attracts new residents and businesses with its low tax burdens, ranking 8th in the Tax Foundation’s 2015 State Business Tax Climate. LePage must continue his strong stance with legislators on passing tax reform in order to reverse Maine’s current stagnant economic growth.

Predictably, this week LePage’s antagonists on the Democratic side of the aisle belittled the plan as lawmakers on the Legislature’s Taxation Committee voted the party-line and recommended against the bill. These opponents seem to miss the intrinsically harmful nature of the income tax, which effectively penalizes work and encourages people (and businesses) to head to states that do not punish productivity and innovation.

Even though Republicans are in the minority on the committee, they remain optimistic that the bill will pass as it moves on to the full Legislature making the plan a priority. When asked about the likelihood of the bill’s passage, House Republican Leader Ken Fredette (R-Newport) responded: “I think the right question is how committed are the Democrats to reducing the size of the government and keeping more money in the pockets of businesses and individuals?”

The Maine State Chamber of Commerce also voiced its support of Governor LePage’s tax-reform proposals. Last week the Chamber called the plan a “historic opportunity” and emphasized its agreement with reductions in not just the income tax, but also the corporate tax and the estate tax. The Chamber stated that the plan will “improve Maine’s economic competitiveness, provide exportability and revenue stability, and that also assist lower-income taxpayers and attract/retain retirees to our state.”

The State of Maine would reap historic benefits from the elimination of the income tax, similar to the consistent, above-average growth that the nine states currently without an income tax enjoy. With political will and business support behind him, LePage stands a real chance of seeing his plan become a reality.