Marijuana has come a long way since California legalized cannabis for medicinal use back in 1996. Today, the industry and marijuana look to be on the cusp of unprecedented acceptance, with major international giants investing billions into publicly traded cannabis companies. So let’s take a look at what investors need to know about the marijuana industry and how to invest in the future of pot.

More than 20 years have gone by since California legalized medical marijuana. Now we are roughly a month away from the entire country of Canada allowing the use of recreational marijuana. In doing so, Canada will become just the second country in the world to legalize the drug nationwide.

Plus, 30 states have legalized the medical use of marijuana. Investors should also note that the U.S. population as a whole has grown much more accepting of the drug. According to a fall 2017 Gallup poll, 64% of Americans now support marijuana legalization—just 12% of Americans voiced their support when Gallup first posed the question in 1969.

The latest poll marked a record high, but at least half of Americans have been in favor of legalized pot since 2011. There is even less of a politically-based divide, with 51% of Republicans backing legalization—the first time it reached a majority level—while 72% of Democrats said they were in favor, according to Gallup.

Looking ahead, drug-policy experts expect some European countries to turn to Canada for legalization guidance sooner than later. Meanwhile, more states are scheduled to vote on marijuana usage in upcoming elections.

How & Why to Invest

Investors will notice that some of these stocks have soared over the last month on the back of Canadian legalization and a wave of seemingly more legitimate investors that want to buy in on the industry at what could easily be its lowest point. The idea here is pretty simple: invest before marijuana really booms. 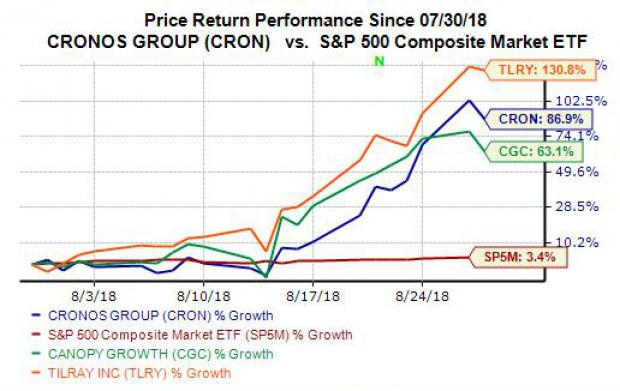 Estimates suggest that legal marijuana sales could total $10.2 billion in the U.S. alone this year, while illegal sales could reach $53 billion. Now just imagine being able to invest in alcohol companies and stocks before Prohibition ended and you understand the motivation of many institutional investors and alcohol giants. And, like sports gambling, if pot is legalized at the federal level, the regulated industry could easily overtake illegal trade.

Constellation Brands (STZ – Free Report) , which brews Corona and Modelo beer and also owns Robert Mondavi wines and Svedka vodka, invested an additional $4 billion in Canopy Growth in mid-August to up its stake in the cannabis company to 38%. The deal also gives Constellation the right to invest an additional $3.4 billion to acquire a controlling stake in Canopy.

Constellation is making a big bet on not only the potential for a global cannabis-infused drink market but also marijuana as a whole. In fact, CEO Rob Sands saidthat marijuana is the “the logical fourth leg” for the company as it provides Constellation a “total mood-modulation portfolio.”

Along with Constellation, Heineken (HEINY – Free Report) rolled out a cannabis-filled sparkling water in California under its Lagunitas brand in July. Molson Coors Brewing Co. (TAP – Free Report) announced in early August that is will introduce cannabis-infused beverages for the Canadian market. Meanwhile, Scotts Miracle-Gro (SMG – Free Report) has inched its way into the marijuana business after its roughly $450 million purchase of U.S. hydroponic distributor Sunlight Supply—hydroponics is a popular method for growing marijuana.

Cronos Group became the first pure-play medical marijuana company to list on an American exchange when it made its debut on the Nasdaq in late February. The firm invests in companies that are licensed to produce and sell medical-grade pot and operates two wholly-owned Canadian licensed producers.

Cronos recently released its second-quarter financial results, which saw its Q2 revenues skyrocket 428% to $3.4 million, while its liquidity reached $118.0 million. The company is currently trading at $10.45 per share.

Moving on, Canopy—which Constellation invested in—offers cannabis and oil products primarily under its Tweed brands. The company is projected to see its current fiscal year revenues soar 484% to hit $356.29 million based on our current Zacks Consensus Estimate. CGC stock is currently trading at around $43 per share.

The jump from the first U.S. state to legalize medical marijuana to the complete recreational legalization of cannabis in Canada happened in only 22 years. And with massive alcohol giants investing and more states on track to legalize Marijuana, now might be a great time to take a chance and invest before things really get rolling.

And this outperformance has not just been a recent phenomenon. Over the years it has been remarkably consistent. From 2000 – 2017, the composite yearly average gain for these strategies has beaten the market more than 19X over. Maybe even more remarkable is the fact that we’re willing to share their latest stocks with you without cost or obligation.