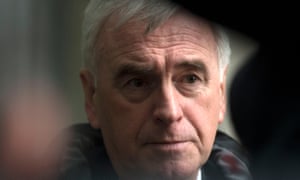 Labour would borrow billions of pounds to fund public investment projects, while exerting an “iron discipline” over day-to-day spending, shadow chancellor John McDonnell has said, as he seeks to win back the party’s reputation for economic competence.

In an interview with the Guardian, he described shoring up Labour’s fiscal credibility as “the struggle of a generation”, but insisted that exerting tight control over spending did not signal the abandonment of Jeremy Corbyn’s anti-austerity stance.

“Socialism is about planning, and planning is about making sure every penny is spent effectively. Every penny misspent is being taken away from the real investment that is needed.”

In his first major policy announcement since he was appointed by his close ally, Corbyn, McDonnell will use a speech in Westminster on Friday to lay out what he calls a “fiscal credibility rule”.

He will say that Labour would balance tax revenues and day-to-day spending over a five-year cycle, but this target would exclude long-term investment projects, allowing Labour to spend billions on projects such as housing, railways or high-speed broadband.

As Corbyn prepares to face George Osborne across the despatch box at next week’s budget, McDonnell said he would “lock away the props” to avoid the embarrassment of last autumn’s spending review, when he flung his copy of Chairman Mao’s Little Red Book at the chancellor. “No props, no jokes,” he said.

Labour’s new approach is similar to Gordon Brown’s so-called “golden rule”, which allowed for borrowing to invest, but McDonnell insists his stance would be tougher, because he would promise to cut Britain’s debt pile and strengthen the hand of the independent Office for Budget Responsibility.

The government will seize on the borrowing plans to claim that Labour would fail to tackle the deficit – the centrepiece of Osborne’s “long-term economic plan”.

But McDonnell pointed to support from experts, including the International Monetary Fund, for the idea that boosting investment can underpin growth, helping to generate tax revenues. The IMF recently called for “forceful and concerted policy action”, including stronger investment spending, to avoid what it called a “derailment” of the global economy.

The shadow chancellor argued that major business groups such as the CBI and the British Chambers of Commerce, the City, banks and trade unions all want to see investment in areas such as skills. “We are all on the same page apart from Osborne,” he said.

McDonnell and Corbyn believe they must win voters’ trust over the public purse strings before they can make the argument for other policies.

They are conscious that many voters believed Labour had overspent in the run-up to the 2008 financial crash, but McDonnell echoed Corbyn’s claim in a speech to the British Chambers of Commerce last week that deregulation of the City was to blame.

“The crisis was caused by a deregulated financial sector and greedy bankers that turned our economy into a casino. It wasn’t a case of Labour spending too much – but you do have to have a balanced economy,” he said.

The chancellor’s much tighter tax-and-spending rules aim to generate a surplus on the public finances by the end of the parliament in 2020, even once spending on investment projects is taken into account.

Osborne will deliver his budget next Wednesday and has signalled that he could be forced to announce fresh spending cuts to reflect the deterioration in the global economic outlook.

But some economists, including McDonnell’s adviser Simon Wren-Lewis, of Oxford University, who has been involved in drawing up the new rules, believe that making spending cuts at a time when growth is weak can simply suck demand out of the economy and exacerbate any slowdown.

Labour’s new target would be suspended when interest rates were close to zero, leaving the Bank of England little firepower left to stimulate the economy. The Bank’s monetary policy would make the decision about when to trigger this so-called “knock out”.

McDonnell’s speech follows a series of interventions by other senior Labour figures in recent days about the direction of the party’s economic policies.

Rachel Reeves, the former shadow work and pensions secretary, called for investment to be excluded from tax-and-spending targets; and Dan Jarvis, who has been touted by some as a potential leadership challenger to Corbyn, said the party must take a closer look at the risks of globalisation for jobs and wages.

McDonnell played down unease on the back benches, saying he welcomed both these contributions – particularly because of the focus on inequality. He said they were excellent speeches that reinforced the views of the leadership.

He said the party would find “mechanisms” to cope with foreign and defence issues on which they disagreed such as Syria and Trident. He said the important thing was “respect for dissent” which he argued had been lost under New Labour.

Corbyn has sought to draw what his spokesman called a “line in the sand” over the noisy dissent from some in the parliamentary party over his stance on a series of issues from Trident to the legalisation of the “sex industry”.

Responding to McDonnell’s comments, chief secretary to the Treasury, Greg Hands, said: “Labour spent and borrowed too much last time they were in power. It’s clear they’ve not learned their lesson and can’t be trusted with the economy.

“At a time of uncertainty in the global economy, Labour is a serious threat to our economic security and it’s working people who would pay the price.”