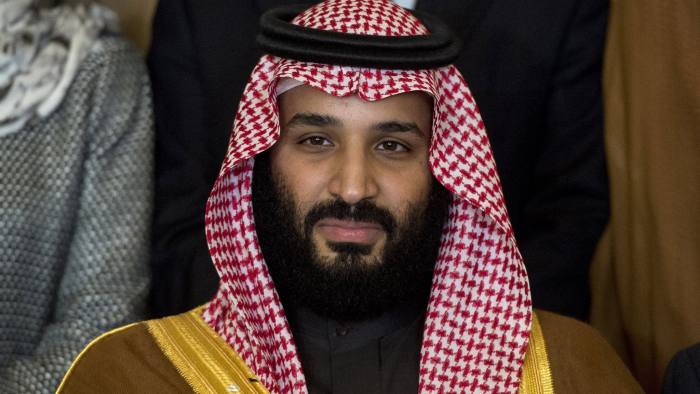 The loans will be the first made to the Public Investment Fund, the vehicle used to drive the young prince’s vision for an economy less dependent on oil, which has placed bold bets on electric car maker Tesla, ride-hailing app Uber and space travel company Virgin Galactic.

The loans are particularly important for the fund after plans to list Saudi Aramco, from which it was due to receive proceeds, were postponed indefinitely. Riyadh’s focus has shifted away from the blockbuster IPO, which had been expected to raise in the region of $100bn, in favour of other means of financing for the PIF.

Some of the most senior names in international banking, including JPMorgan’s Jamie Dimon, Morgan Stanley’s Franck Petitgas and Goldman Sachs’s Dina Powell, the former Trump White House official, have been actively pitching for the deal.

The PIF had hoped to raise up to $8bn, but one person close to the deal said the loan was oversubscribed and likely to be set at $11bn with a spread of 75 basis points over Libor, commonly used as a floating rate benchmark.

One banker involved said: “Everyone has gone in fairly aggressively.”

Syndicated loans to sovereign wealth funds are unusual, with large Middle Eastern funds such as the Qatar Investment Authority typically borrowing against specific investments instead.

As many as 16 banks are expected to participate in the syndicated loan, with the lead banks to be selected late on Thursday, people involved in the process said.

The banks, many of whom spent years courting the kingdom and counting on fees from the Saudi Aramco IPO, now find themselves jostling for favour for other Saudi transactions, with the loan seen as a key to getting access to future deals.

Several senior bankers said getting their foot in the door at the PIF was critical because the state fund is also planning to sell a $70bn stake in Sabic, the Saudi chemicals group, to Saudi Aramco, in one of this year’s largest deals. The sale, which moves money from one state coffer to another, will have implications for league table rankings that banks use to measure their performance against rivals.

While work on the Saudi Aramco IPO has dramatically slowed amid concerns about legal exposure and an inability to generate Prince Mohammed’s hoped-for $2tn valuation, some bankers have shifted their focus to the Sabic deal, said one adviser.

They are also assessing how the Sabic transaction might affect the viability and timing of a future Saudi Aramco flotation, the adviser said. The kingdom insists the IPO has not been called off despite mounting signs it is unable or unwilling to execute a listing.

Banks are vying for a chance to participate in a potential $40bn-$60bn debt financing that Saudi Aramco will need to finance any deal to buy the Sabic stake from the PIF. That cash could act as a substitute for funds that had been expected from the Saudi Aramco IPO.

The PIF, led by Yasir al-Rumayyan who is a close ally of Prince Mohammed, has more than $250bn of assets under management that it plans to expand to $400bn by 2020. To finance deals, the fund has received cash from the Saudi central bank, sought to sell stakes in companies it owns. issued debt and drawn on proceeds from the privatisation of state assets.

It is expected to rely increasingly on bond and bank loan funding as finance ministry handouts have diminished and big-ticket investments, including tens of billions of dollars pledged to funds run by SoftBank and Blackstone, have yet to yield returns.

Earlier this month, the FT reported that the PIF had quietly built close to 5 per cent stake in Elon Musk’s electric car company Tesla. Mr Musk later wrote on Twitter that he was considering taking the company private and that he had the “funding secured”.

Mr Musk later said his discussions with the PIF had led him to believe it was only a matter of finalising the Saudi fund’s support for a deal. However, people close to the PIF said its leadership has given no indication there are serious discussions about putting more money into Tesla to allow Mr Musk to take his company private.

Law firm Latham & Watkins is helping the PIF on the loan process, while White & Case, the law firm who was leading the Saudi Aramco IPO work, is set to work with the banks, according to the loan documents.