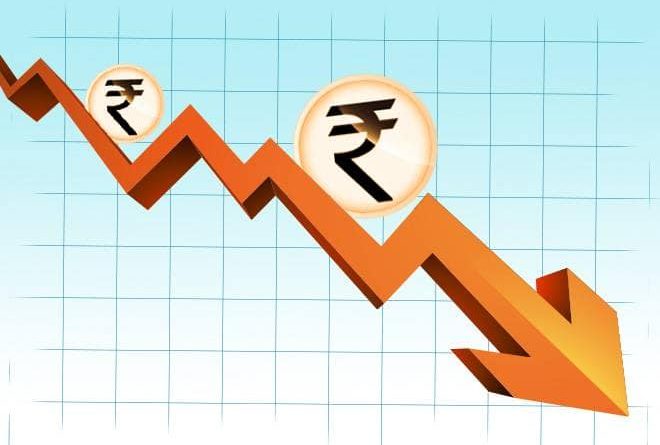 Rupee logged its biggest single-day fall in 2019 against the US currency on Tuesday amid weak economic data and negative stock market sentiment. The domestic currency opened lower by 55 paise at 71.95 per dollar versus Friday’s close of 71.40. The Indian currency extended its fall in late afternoon session declining 100 paise to 72.40 per dollar. Later, the currency closed 99 paise lower at 72.39 to the dollar. Rupee hit its all-time low at 74.48 on October 11, 2018. It has fallen 3.76% since the beginning of this year.

Forex traders said the US tariffs on imports from China took effect on Sunday and were followed later by Beijing’s retaliation. Moreover, China has said it has plans to retaliate by increasing duties on $75 billion American goods, that includes imported goods like soybeans and crude oil. Following this, the domestic currency came under pressure.

Anand James, chief market strategist on Rupee at Geojit said, “Rupee, already under pressure from strong dollar amid Brexit worries, received a major jolt as June quarter’s GDP reading fell to 5%. This was further exacerbated by dismal August auto sales even as markets gave a thumbs down to PSBs mergers, thereby raising worries of further rupee selling, as the FII exodus from equities continues. Inflows are coming in the form of bonds, anticipating more rate cuts, but they remain less compared to the outflows.”

Weakness in the market led by announcement of mergers of public sector banks and lower than  expected economic data also affected sentiment in currency market today.

The domestic currency also came under pressure due to the ongoing US-China trade war. The currency is likely to extend its fall if trade war escalates between the two nations.

“On the global front, trade war escalated between the two biggest nations. First US imposed 15 percent tariffs on Chinese imports and then China retaliated by imposing tariffs on $75 billion of US goods. On account of pertinent risk in global market and slowdown in Indian economy, FIIs have sold nearly Rs 17,592 crore in Indian equity market in August 2019. Rupee is likely to depreciate towards 73.5 by the end of September 2019 if trade war escalates further between US and China and outflows from Indian equity market continue, ” added Khan.

On Friday, govt data said GDP growth slipped to 6-year low of 5 per cent as compared to 5.8 per cent in the previous quarter, weighed down by slump in manufacturing output, weak consumer demand and deceleration in private investment.

Expansion in manufacturing sector hit its slowest in 15 months in August as demand and output grew at their weakest pace in a year and cost pressures increased, a private sector survey showed on Monday.

The Nikkei Manufacturing Purchasing Managers’ Index, compiled by IHS Markit, declined to 51.4 in August from July’s 52.5, its weakest since May 2018. However, it has remained above the 50-mark separating growth from contraction for more than two years.

The rupee had appreciated by 38 paise to close at a two-week high of 71.42 against the US dollar on Friday led by a rally in domestic equities and renewed hopes of the US-China trade talks.

The forex market was closed on Monday on account of Ganesh Chaturthi. Foreign institutional investors (FIIs) remained net buyers in the capital market, putting in Rs 1,162.95 crore on Friday, provisional data with the exchanges showed.

The dollar index, which gauges the greenback’s strength against a basket of six currencies, inched up 0.37 per cent to 99.28.

Meanwhile, Sensex and Nifty ended in the red post announcement of mergers for public sector banks by the Modi government and lower than expected economic data. While Sensex closed 769 points or 2.06 per cent lower at 36,562 , Nifty fell 225 points or 2.04 per cent to 10,797.90.