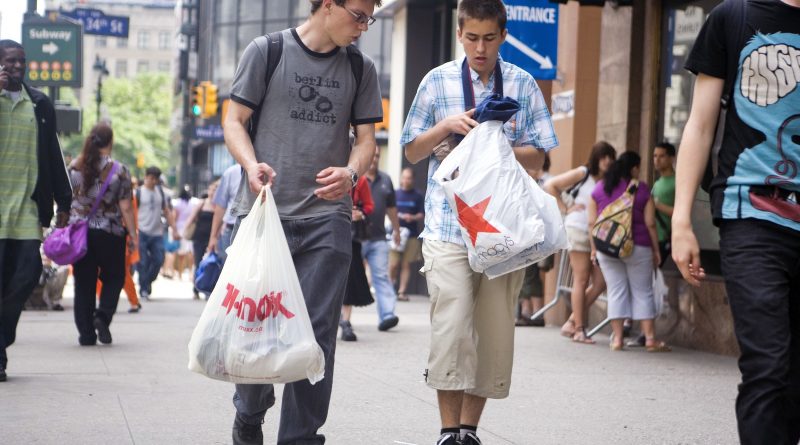 American consumers are flexing their muscles, and that’s helping to save the economy from even slower growth as it faces what could be a more protracted trade conflict with China.

Spending data, released Tuesday, showed consumers last month went on a shopping spree for apparel; ate at restaurants and bought cars at a faster-than-expected pace. Retail sales for June rose 0.4%, more than the 0.1% expected by economists. This contrasts to sluggishness in manufacturing data and weaker business investment spending.

“The consumer is playing Atlas. They’re holding up the economy, and it’s role they’ve been in before. It’s a role that’s gotten us in trouble before,” said Diane Swonk, chief economist at Grant Thornton. Core retail sales rose 0.7%

Consumers may already be benefiting from the Fed’s promised rate cuts, since Treasury yields have declined ahead of the first move, expected at the July 30/31 meeting. The 10-year Treasury yield was at 2.12%, above recent lows but still off the higher levels above 2.70% earlier this year. That yield, which moves opposite bond prices, influences the rate for mortgages and other loans.

“The consumer is not preoccupied by the trade wars. We still have job gains,” said Swonk. “The Fed is the reason for this.Their pivot allowed the [bond rally] that allowed people to refinance their mortgages which is one of the factors behind this. They’re using credit cards more. That’s a recent phenomena…We have some latitude here. You finally have people qualifying because they have jobs and some higher incomes.”

The American consumer drives about two-thirds of the U.S. economy, and the strength contrasts fairly dramatically with the business side of the economy. Economists said the consumer is preventing the economy from slowing even further, as the trade war seems as it could continue for months.

President Donald Trump Tuesday said there’s a long way to go before a dealcan be made with China.

“The consumer was already strong. The weakness has been in business fixed investment and primarily cap ex-related manufacturing activity. The two are related and both are a a consequence of trade tensions,” said Ward McCarthy, chief financial economist at Jefferies.

As the trade wars dragged on longer than expected, growth has weakened. Second quarter growth is well off the first quarter’s 3.1% pace.

Economists, however, raised second quarter growth forecasts by a tenth of a percentage point Tuesday to a median 1.8%, after retail sales, industrial production and business inventories, according to CNBC/Moody’s Analytics rapid update of economists’ GDP forecasts.

“Retail sales would have pushed it 0.3% higher, but import prices being weak, took a tenth off,” said Michael Gapen, chief U.S. economist at Barclays.

“We’re tracking consumption growth at over 4% in the quarter. But you need to take that number in context with the first quarter, where it was running at about 1%. On average, it’s around 2.5%…and that’s where we think the consumer should be,” said Gapen.

Gapen had previously expected a 50 basis point, or half percentage point rate cut from the Fed, but he shaved that to 25 basis points July 5, after the strong June jobs report showed the creation of 224,000 non farm payrolls. He still expects 75 basis points of cuts.

“The risk is you only get 50 basis points in cuts. The stronger the consumer is, the more comfortable you are. Also maybe the less insurance you need. But at present our call is 75 over the remainder of the year,” said Gapen.

Economists said they do not expect the strong retail sales to impact the Fed’s rate cutting decision, since Fed Chair Jerome Powell said the strong June jobs report would not affect its rate decision. The rate cut is seen as a pre-emptive measure to prevent negative impacts from trade and the slowing global economy from stalling out U.S. growth.

“I think the market is ahead of the Fed and quite frankly…what the data showed us is no trade cut is necessary,” said McCarthy. “It’s already a very healthy consumer. It might help on the margin, but you’re helping a sector of the economy that doesn’t need any help.”