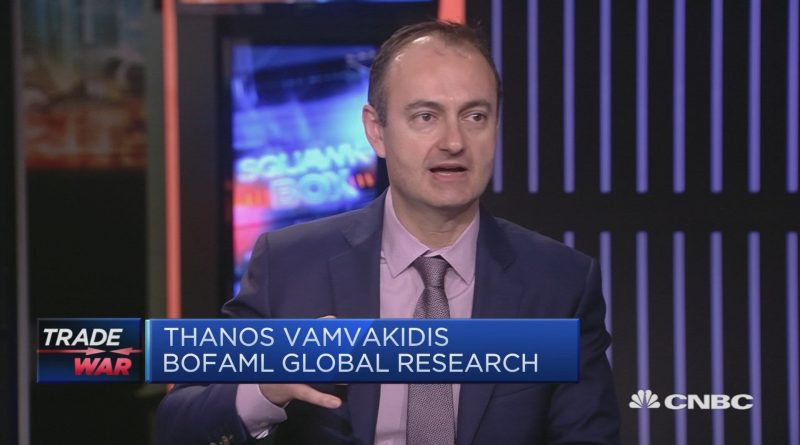 Central banks are currently embroiled in a covert currency war which is causing stagnation in foreign exchange markets, according to Thanos Vamvakidis, the global head of G-10 FX strategy at Bank of America Merrill Lynch.

Monetary policy easing has been a key theme for central bankers so far in 2019, with the U.S. Federal Reserve, the Bank of England and the European Central Bank (ECB) all signaling dovish stances and fueling speculation of more monetary policy easing.

Wall Street analysts have begun to speculate that President Donald Trump may intervene to weaken the nation’s currency, following a series of comments made by the U.S. president.

Trump most recently complained that China and Europe had embarked on policy moves designed to cheapen their currencies in order to be more competitive with the U.S. on trade, and has repeatedly criticized the Fed over a lack of cuts to interest rates.

“They cannot affect the borrowing cost because interest rates are historically low, so the only way they can ease further monetary conditions is to weaken their currency,” he told CNBC’s “Squawk Box Europe” on Tuesday.

“However, it’s about equilibrium because when everybody is doing it, then currencies don’t really move, you don’t benefit anything because you end up wasting very limited monetary policy ammunition without much of a result. So in a way, we are in a currency war, although nobody has admitted it,” he added.

Vamvakidis argued that although in theory, governments can intervene when currencies are overvalued, the way such interventions are unfolding at present is producing more negative side effects.

“Everybody is trying to move their currencies, but everyone is trying at the same time, and in the end, nobody benefits,” he said. “The collateral damage of all this is that international policy coordination suffers.”

The U.S. has long paid lip service to the “strong dollar policy” but analysts have noted the Trump administration’s apparent wavering on this commitment.

Vamvakidis said that while he disagreed with Trump’s targeting of the currency directly, the strong dollar policy should be abandoned.

“It makes no sense, no other country has it, it was introduced in the mid-90s, it is symbolic, the U.S. has done nothing to support it, and actually it is justified in a very strange way,” he said.

“The argument is that the U.S. economy is strong, therefore the dollar should be strong. They may as well replace it with a strong growth policy.”