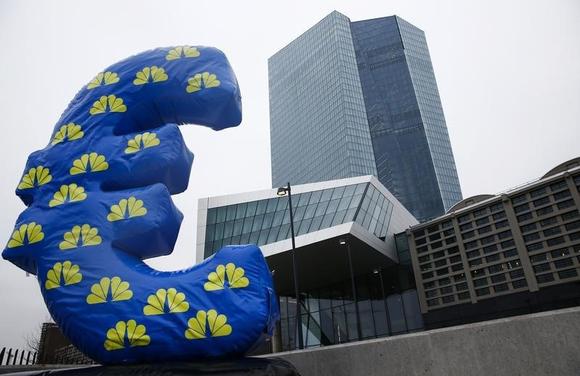 (Reuters) – The ECB’s chief economist warned central bankers from around the euro zone of the perils of delaying quantitative easy, according to records of a January meeting that shed light on how policy makers ‘broadly’ agreed to launch the scheme.

Speaking to the Jan. 22 gathering of the ECB’s Governing Council, which sets policy, Peter Praet addressed the risks of waiting before launching a program of quantitative easing, or QE — effectively printing money to buy government bonds.

The minutes of the meeting give a bare-bones account of the discussion, but they do provide a glimpse of the pressure and tension involved in ECB decision making, which seeks to forge consensus among 19 different countries from Germany to Greece.

Praet’s presentation and the discussion afterwards convinced most of those present of the need for immediate action. Some argued that such a step should only be taken in ‘contingency’ situations.

“A reversal of recent financial market developments could be expected if no further policy measures were announced,” officials wrote. “The associated positive impact … could be unwound and a higher degree of volatility or instability in the financial markets could create additional risks.”

In the end, most agreed: “There was a broadly shared view that the conditions were fully in place for taking additional monetary policy action at the current meeting.”

The pockets of resistance, widely seen as led by Germany’s Bundesbank, did gain some concessions. Only a fraction of the risk would be borne by the ECB; most would remain with the euro bloc’s 19 central banks.

That group also argued the buying corporate bonds would be a better tactic, although it was “widely judged” the effect would be limited, since that market is so small.

“At the same time, the remark was made that this asset class should not be excluded from future consideration, if needed,” it was added.

This is the first time the ECB has published details of its discussions and brings it more in line with other major central banks, such as the U.S. Federal Reserve, Bank of England and Bank of Japan. But the exercise is sensitive, and none of the national central bank governors who attend are identified.

Perhaps a little surprising given the objections of banks like the Bundesbank, it was decided to front load the purchases, so that 60 billion euros will be spent in the earlier months rather than the 50 billion suggested by Praet.

There was also some clarification on some of the plan’s finer details. For example, the ECB will only cap its buying at 33 percent of the 2- to To-year bonds that are on the market, not the entire list of bonds in issuance.

That’s good news for Ireland. Its central bank already holds a large chunk of 27- to To-year bonds as a result of measures taken during its banking crisis. The ECB would not have allowed to buy any new Irish bonds had the 33 percent limit related to all bonds.