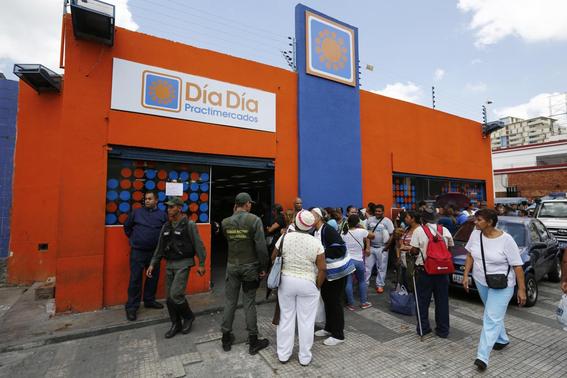 (Reuters) – The U.S.-based owner of a supermarket chain taken over by Venezuela’s socialist government hopes to recover his business despite accusations of hoarding goods to inflate shopping lines.

The company’s executive director, Manuel Morales, and external lawyer Tadeo Arriechi are in jail on charges of “boycott” and “economic destabilization,” along with two Farmatodo pharmacy executives also seized in nationwide inspections and raids.

Dia Dia owner Jose Vicente Aguerrevere, a Venezuelan who now lives in Boston after spending most of his life in Europe and the United States, told Reuters by telephone that the accusations of hoarding products to stoke public exasperation were false.

Massive shopping lines at supermarkets and pharmacies around Venezuela since the start of 2015 have drawn attention to product scarcities in the recession-hit economy, embarrassed the Maduro government, and annoyed Venezuela’s 30 million people.

“We don’t want to sell, or be expropriated,” Aguerrevere, who earned an MBA in business at Harvard University, said of the business he founded nine years ago in low-income communities.

“We were born in the stage Venezuela is living through today, we’re not from before (Hugo) Chavez,” he said, referring to Maduro’s predecessor who clashed with private business constantly during his turbulent 1999-2013 rule.

“We understood the risks, but being a company that follows the law, we never thought we’d be part of this (a takeover).”

It is unusual in Venezuela for owners of businesses in dispute with the government to speak to the media, and Aguerrevere was careful not to stray onto politics.

Foes blame the state-run economic model, including nationalizations and currency controls, for causing the current recession, shortages and highest inflation the Americas.

The government says political opponents, backed by unscrupulous businessmen, are sabotaging the economy as part of a U.S.-backed strategy to oust Maduro.

Aguerrevere, who has worked in the past at Booz Allen & Hamilton and Merrill Lynch and picked up a prize for “social innovation” for his Dia Dia business, said he had intended to invest $3.5 million in 10 new shops this year.

“They’ve been auditing us once or twice a week for the last five years,” Aguerrevere added, saying the company had changed nothing recently in its business methods and had documents proving government approval for all its inventories.

Pdval is currently operating the Dia Dia stores, though access is restricted to customers according to their identity number to ensure only one visit per week.

“The best way to defend the two people in jail is to keep working well during this intervention,” he said, adding that he was speaking with Pdval officials every day in the hope of having the business eventually returned.

“We don’t want to give up, we want to carry on doing what we know how to do, provide products for low-income sectors.”