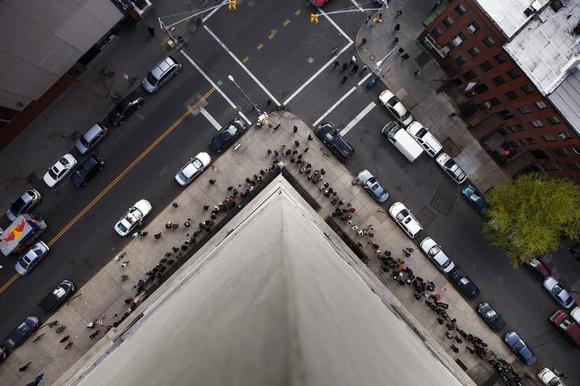 Initial claims for state unemployment benefits dropped 21,000 to a seasonally adjusted 283,000 for the week ended Feb. 14, the Labor Department said on Thursday.

“The jobs market has its pedal to the metal. We have crossed the dividing line where there are more signs of labor shortages now than there is an excess supply of discouraged workers pounding the pavement,” said Chris Rupkey, chief financial economist at MUFG Union Bank in New York.

The labor market also got a boost from Wal-Mart Stores Inc (WMT.N), the largest private sector employer in the United States, which said it would spend more than $1 billion this year to increase pay for about 40 percent of its U.S. workforce.

The retailer’s hourly full-time and part-time workers will earn at least $9 an hour, or $1.75 above the current federal minimum wage, starting in April.

Prices for longer-dated U.S. Treasuries traded slightly higher, while the dollar was little changed against a basket of currencies. U.S. stocks were mixed.

Sturdy wage growth has been the missing piece in the jobs recovery, which is showing signs of rapidly accelerating.

From unemployment claims to payrolls and job openings, the labor market is becoming robust, even as economic growth has slowed in recent months.

Weaker demand overseas and cutbacks in capital spending by businesses in the oil sector, where profits are under strain from lower crude prices and a strong dollar, are curbing growth.

A separate report on Thursday showed factory activity in the U.S. mid-Atlantic region slowed in February to its lowest level in a year as companies struggled to get new overseas business.

The Philadelphia Federal Reserve Bank said its business activity index fell to 5.2, the lowest since February 2014, from a reading of 6.3 in January. A reading above zero indicates expansion in the region’s manufacturing.

That weakness is likely related to softening economies in Europe and Asia as well as a strong dollar, which are expected to result in a moderation in U.S. growth in the first quarter.

“A lot of the demand has been domestically sourced, so a lot of export-oriented industries are facing headwinds given a stronger dollar and weaker global growth backdrop,” said Gennadiy Goldberg, an economist at TD Securities in New York.

“I would expect a pick-up given how quickly employment is growing and just how solid the U.S. recovery has been thus far.”

Last week, the four-week moving average of jobless claims, considered a better measure of labor market trends as it irons out week-to-week volatility, fell 6,500 to 283,250.

The data covered the week that the government surveyed employers for February’s nonfarm payrolls.

The four-week moving average of claims fell 23,750 between the January and February survey period, suggesting another month of job gains above 200,000.

The economy has added more than a million jobs over the past three months, a performance last seen in 1997. A key measure of labor market slack – the number of job seekers for every open position – hit its lowest level since 2007 in December.

Minutes of the Fed’s Jan. 27-28 policy meeting published on Wednesday, however, suggested policymakers were not in a hurry to hike borrowing costs because of concerns over low inflation and a weakening global economy.

The U.S. central bank has kept its key short-term interest rate near zero since December 2008.