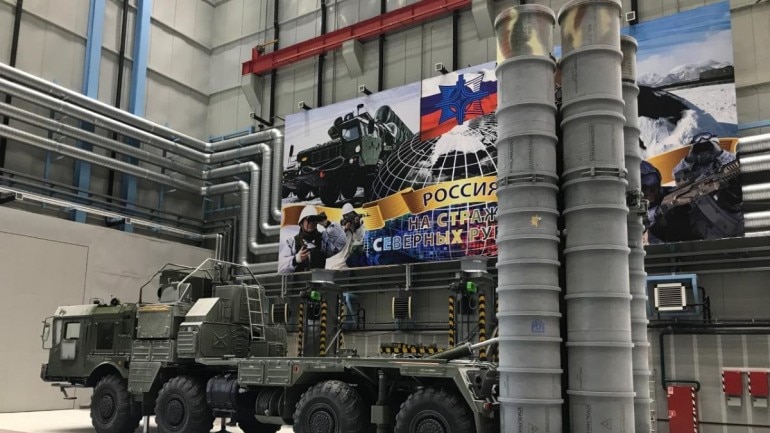 In a massive blue-roofed test facility outside St Petersburg, grim-faced lab coat-wearing technicians swing open 20-foot tall metal doors. Thick white clouds spread out. The long, green silhouette of an 8×8 truck lumbers out, bellowing furiously, its headlights shining through the fog, four giant missile canisters stacked horizontally on the chassis like large logs of wood. This scene from the test facility of Russian missile maker Almaz-Antey’s plant could be straight out of a Jurassic Park or Transformers movie franchise.

The 8×8 Transporter Erector Launcher (TEL), which launches Russia’s most controversial arms export in recent years-the System-400 (S-400) long-range air-defence missile-is being stress-tested in temperatures that are 50 and 70 degrees Celsius below zero. Last October, India signed a $5 billion (Rs 35,000 crore) deal with Russia to buy five systems of this missile that NATO calls the SA-21 ‘Growler’. The deal was concluded against strong objections from the US. Washington has objected to India buying the missile partly because it has applied sanctions on Russian arms firms, but it’s mainly because of the formidable capabilities of the S-400 missile. The missile, the US fears, will jeopardise future arms sales of high-performance aircraft, such as the F-35, to India.

The S-400 system is highly mobile-all radars, missiles and launchers are mounted on 8×8 cross-country trucks, which makes them harder to detect and destroy. The entire system can be made ready to fire in a matter of minutes. The S-400’s crown jewel is its 92N6E electronically-steered phased array radar, dubbed ‘Grave Stone’, that can track 300 targets over 600 kilometres away and, based on the threat and range, shoot four different missile types at them. Each S-400 system has four types of missiles from the 400-km range, 200-km range, 100-km and 40-km range, forming a nearly impenetrable interlocking grid of missiles. It can detect and destroy targets flying as low as 100 feet to as high as 40,000 feet. The S-400 long-range air-defence missile is being stress-tested in temperatures that are 50 and 70 degrees Celsius below zero. (Photo:Sandeep Unnithan/India Today)

These missiles can address multiple aerial threats, from combat jets to cruise missiles and air-launched smart bombs, and are resistant to electronic jamming.

The Indian Air Force (IAF), which has closely studied the S-400 system for the past five years, was impressed by these capabilities. The IAF’s air defence missiles can currently only engage targets 40 kilometres away. The Medium-Range Surface-to-Air Missile or MRSAM to be acquired from Israel next year will increase its engagement range to nearly 80 kilometres. The S-400 on the other hand, more than quadruples the IAF’s missile reach.

“Deploying one S-400 system allows you to cover an entire spectrum of aerial threats,” says a senior IAF official. The missile system offers such a quantum jump in its capabilities that, the official says that the IAF advised the government to purchase it even at the risk of incurring US wrath. India also rejected US counter-offers of the Patriot Advanced Capability-3 (PAC-3) and Terminal High Altitude Area Defense (THAAD) to stop the sale.

The deal was directly concluded between the Indian and Russian governments in just two years, considerably shorter than the Indian defence ministry’s circuitous negotiations and acquisition cycle. Interestingly, transfer of technology and defence offsets, usually insisted on by the defence ministry for large volume deals, were waived. A new payment route for India to pay for the purchase, bypassing US banking networks, was recently formalised.

The IAF sees in the S-400 an answer to many of its existential woes-a dwindling fighter jet fleet and the increasing sophistication of enemy fighter aircraft. The force has only 32 fighter squadrons as opposed to a sanctioned 39.5. This is seen as inadequate for its primary tasks of securing Indian airspace from intruding enemy aircraft and conducting aerial warfare by bombing enemy targets. This crisis is likely to be exacerbated by 2027 when over 100 MiG-series fighter jets are phased out, leaving the IAF with just 19 fighter squadrons. The only acquisition by then would be two squadrons of 36 Rafale fighter jets-to be delivered by 2021. The IAF’s potential adversaries, China and Pakistan, have inducted cutting-edge fighter jets like Block 52 F-16s and, in the case of the People’s Liberation Army Air Force (PLAAF), the fifth-generation J-20 fighter. In case of war, the IAF would be hard-pressed to deploy its fighter jets in defensive and offensive roles.

This imbalance changes with the acquisition of the S-400. The missile system can undertake a bulk of the airspace defence role. From their locations in India, the S-400’s radars can look deep inside Pakistani territory and pick up enemy aircraft almost as soon as they are airborne. Deployed along the eastern border with China, the missile system can monitor fighter jets taking off from airfields along the Tibetan plateau. “In case of hostilities, the S-400s will free up our multi-role fighters for other tasks like air-to-ground bombing missions, instead of tying them up in the air superiority role of shooting down enemy fighters,” says a senior IAF official.

Russian officials confirmed that deliveries of all five systems will be completed by 2024 at the rate of one system a year, beginning 2020. The first S-400 mobile launcher could even be rolling down Rajpath as early as January 26, 2021. An air defence silver bullet if there was ever one.